This year we had quite the baby boom as we welcomed several new additions to our herd, including Nelson the Asian elephant, Kivuli the okapi, Peter Rabbit the Schmidt’s red-tailed monkey, three bongos, and more. Take a look back at all of our new additions in 2020! The Zoo works to protect the wild baby counterparts of each of these animals in the wild. 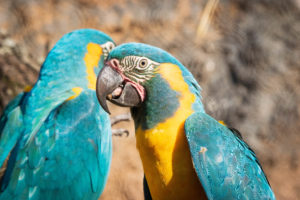 In January 2020, a blue-throated macaw hatchling was born behind the scenes as part of a recommendation from the Association of Zoos and Aquariums (AZA) Species Survival Plan® (SSP). The Houston Zoo has successfully reproduced blue-throated macaws for many years. Our efforts have strengthened the population for possible reintroduction work in the future. You can see our hatchling’s siblings on exhibit in South America’s Pantanal. 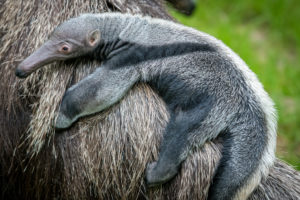 On the evening of March 31, a baby giant anteater was born to mom, Olive. Giant anteaters spend the first few weeks of life clinging to their mothers and will typically hitch a ride on mom’s back for almost 12 months. 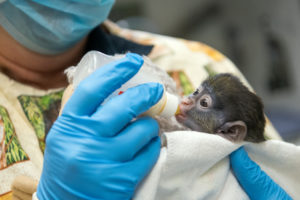 In the early hours of April 10, a male Schmidt’s red–tailed monkey was born to mother Njeri and has been named Peter Rabbit in honor of Easter weekend. Peter was hand-raised by keepers and veterinary staff members after the infant could no longer hold on to mom before reuniting with mom full-time in August. 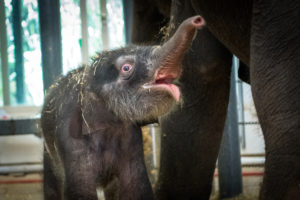 On May 12, 29-year-old Asian elephant Shanti gave birth to a 326-pound male calf after a short labor. Immediately following his birth, the elephant team and veterinary staff saw that he was hemorrhaging severely from his umbilicus. Upon further investigation, they determined that he tore a vessel in his umbilical cord during birth. The team acted quickly to sedate the one-hour-old calf and get him into emergency surgery. The Houston Zoo veterinarians preformed the 30-minute procedure to find the torn vessel, stop the bleeding, and close the hole in the calf’s abdomen. 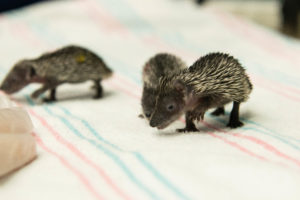 On June 16, three Madagascar lesser hedgehog tenrecs were born at 11:00 a.m. The tiny newborns weighed only 10 grams (small enough to fit on a small spoon!) at birth and are now 10x their birth weight. The tenrecs at the Houston Zoo live behind the Children’s Zoo and participate in educational programs and keeper talks. They are ambassador animals helping to educate guests the importance of saving their counterparts, and other animals, around the world. 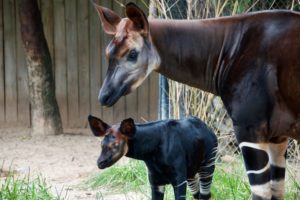 On July 19, the Houston Zoo welcomed a baby okapi to the world. Mom Sukari (13) delivered the calf in the okapi yard, and within the hour, the calf stood with help from mom. She made her public debut on August 12. We then held a public naming contest and the name that was chosen was Kivuli, which means “Shadow” in the Swahili language. 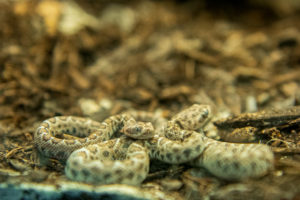 In the fall, the Herpetology department welcomed some of the Zoo’s smallest new additions, two Santa Catalina Island rattlesnakes and 40 Bornean eared frogs. The rattlesnakes’ birth is an important event, both for the SSP population and for the Houston Zoo, as these offspring are not only genetically valuable, but this was also the first time this species has reproduced at the Houston Zoo. 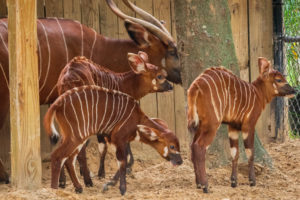 The Houston Zoo’s male eastern bongo Bobby is a daddy, times three! Over a span of three and a half weeks, the three female bongos each gave birth to healthy calves. Penelope gave birth on July 21 to a male calf, Bernadette on July 29 to a female, and Lily is our most recent mother, birthing her male calf on Aug. 15. After spending time bonding behind-the-scenes, all three baby bongos and their mothers can be seen daily in the bongo yard at the Houston Zoo. 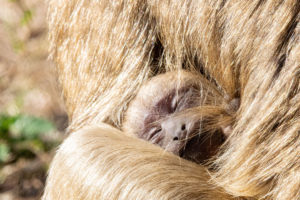 And last, but not least! A baby howler monkey, named Marlie, was born on Nov. 17 to mom Charlie and dad Howie. Both mom and baby are healthy, and after spending time together bonding, they can now be seen with the rest of the howler monkey family in South America’s Pantanal.