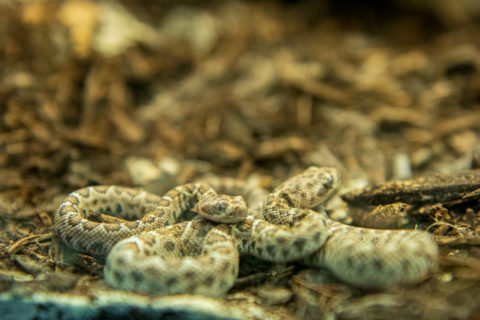 There’s a lot happening behind the scenes at the Houston Zoo! The Herpetology department recently welcomed some of the Zoo’s smallest new additions, two Santa Catalina Island rattlesnakes and 40 Bornean eared frogs. Read more about these unique reptile and amphibian species and why it’s critical to The Association of Zoos and Aquariums (AZA) Species Survival Plan® (SSP) to ensure a genetically diverse population of these species.

The Santa Catalina Island rattlesnake (Crotalus catalinensis) is a small rattlesnake found only on the island of Santa Catalina located in the Sea of Cortez, Mexico (also known as the Gulf of California). It is unique in that it is the only rattlesnake species that lacks a rattle, so it is also known as the rattle-less rattlesnake. This species is listed as critically endangered on the IUCN Red List and is considered to be at a high risk of extinction due to the small size of the island and the introduction of invasive species, such as feral cats. A long-term drought, which has resulted in the reduction of their primary prey population (small rodents and lizards), is also a contributing cause of their decline.

Although the Santa Catalina Island rattlesnake was first brought into an AZA-accredited institution in 1976, by 2008 there were no more living animals in zoos. This situation was remedied in 2009 when the San Diego Zoo and the Los Angeles Zoo brought in 12 individuals to serve as founder stock for a captive assurance and SSP population. All animals currently in zoos are descended from these animals.

On September 8, two of these rattlesnakes were born at the Houston Zoo. This is an important event, both for the SSP population and for the Houston Zoo, as these offspring are not only genetically valuable, but this was also the first time this species has reproduced at the Houston Zoo. The snakes are currently being raised off display, but you can see their parents in the Reptile and Amphibian building.

The Bornean eared frog (Polypedates otilophus) gets its name from the bony ridges behind the eyes, which sort of resemble big spikey-shaped ears. It’s also known as the file-eared tree frog or the bony headed flying frog. They are found in parts of Indonesia and Malaysia in lowland forests. Once quite rare in zoos, their numbers are increasing due to successful captive breeding. For the first time, this species has successfully bred at the Houston Zoo.

The Bornean eared frog has a very unusual reproductive strategy in that the females will lay their eggs in specially constructed foam nests in vegetation hanging above pools of water. As the tadpoles hatch, they will fall into the water which can sometimes be over 6 feet below the nest. The tadpoles grow to a large size and will metamorphose in 8-10 weeks. The next time you visit the Zoo, you can see our adult Borean eared frogs while the juveniles are raised behind the scenes.

The Houston Zoo is saving frogs and other wildlife by providing support for over 150,000 trees to be planted in Borneo. We are working with wildlife conservation partners in Borneo to replant a forest corridor designed to create safe paths and homes for wildlife.