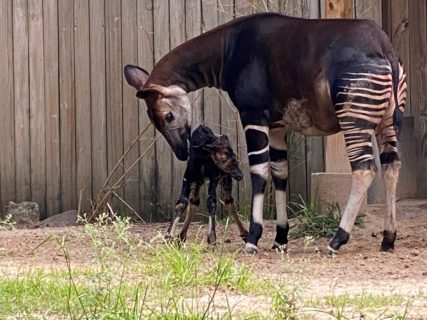 At 3 p.m. yesterday afternoon, the Houston Zoo welcomed a baby okapi to the world. Mom Sukari (13) delivered the calf in the okapi yard, and within the hour, the calf stood with help from mom. The calf’s gender has not been identified.

Okapi are solitary animals, also known as the “forest giraffe,” and are native to the Democratic Republic of the Congo in Central Africa. Since it was first discovered by the western world in 1901 it has captivated the imagination like few other species. Unlike its cousin the giraffe, the okapi is very rare and only found in the most remote rainforests of central Africa.

The Houston Zoo is helping save okapi in the wild by providing support and equipment for local staff at the Okapi Conservation Project in the DRC. Everyone can do their part to save these incredible animals by recycling your cell phones at the Zoo. These devices contain a metal mined where okapi live and recycling the cell phones reduces the demand for new materials to be mined.