The Houston Zoo is pleased to announce that its “Keeping Our World Wild” centennial fundraising campaign efforts have exceeded the targeted goal of $150 million. This accomplishment is a testament to the generous support of the community and is a significant milestone in the Zoo’s history.

The campaign was publicly launched on April 5, 2018, with a $50 million lead gift from the John P. McGovern Foundation, the largest gift in the Zoo’s history. Generous support for the campaign was also received from The Brown Foundation, Houston Endowment, and The Robert and Janice McNair Foundation. Chaired by board members Dr. Cullen Geiselman and Joe Cleary, the campaign raised funds from individuals, foundations, corporate partners, and the Houston Zoo’s operational cash flows to complete Phase I of the Zoo’s master plan. So far, the campaign has contributed to the opening of The Hamill Foundation Black Bear Exhibit, Cypress Circle Café, Kathrine G. McGovern Texas Wetlands, a renovated orangutan exhibit, and the award-winning South America’s Pantanal. After the Galápagos Islands exhibit opens, the Zoo will begin a complete transformation of its bird facilities into a state-of-the-art Birds of the World exhibit complex. Additionally, the Zoo has pledged to devote $5 million from the campaign to support wildlife conservation projects related to the new exhibits, in Texas and beyond. To date, the campaign has secured 1,001 gifts totaling $151,693,153.32 from 707 donors.

In celebration of this achievement, the Houston Zoo is announcing the public opening date for its new Galápagos Islands exhibit—Friday, April 7. Member and donor previews, sponsored by TXU Energy, will precede the opening. The first major exhibit of its kind to showcase the remarkable wildlife of the legendary island chain, the Houston Zoo’s Galápagos Islands will immerse guests in environments evoking the archipelago’s unique landscapes and oceanic habitats and highlight efforts to protect it for the future. No place on our planet better exemplifies the wonders of unique species, the delicate balance of ecosystems, or the pressing need for conservation action more than the Galápagos.

“We are deeply grateful for the exceptional support we have received during our centennial campaign,” stated Lee Ehmke, President and CEO of the Houston Zoo. “The opening of our Galápagos Islands exhibit will be a momentous occasion, and we are excited to introduce these remarkable animals and places they represent to the community. It is our hope that this exhibit will inspire visitors to learn more about conservation and the vital role the Zoo plays in protecting these species for future generations.”

The Zoo is marking this occasion by introducing some of the new animal residents now moving into the exhibit.

The Zoo’s current colony of five California sea lions will soon meet four new female California sea lions: Ariel (19), Calypso (19), Gaia (8), and Freya (8). The new pinnipeds have moved to Houston from a California rescue facility and are settling into the back-of-house sea lion care area while their main habitat pool is being completed. California sea lions have been a favorite offering of the Houston Zoo for decades and will have a starring role in the new Galápagos Islands experience, “standing in” for the closely related Galápagos sea lions. By experiencing these animals up close, guests will gain an appreciation of their connection to our shared ocean and how we can all help protect animals in the wild.

Perhaps the most-recognizable inhabitants of the island chain are the giant Galápagos tortoises, a species that will take center stage at the new exhibit in an expansive new habitat. The Zoo’s tortoises are descended from individuals that came to the United States in 1928 as a part of a conservation program initiated by the Bronx Zoo; seven additional tortoises will soon join the Zoo’s three resident tortoises, moving into the new tortoise care barn after completing their quarantine period. 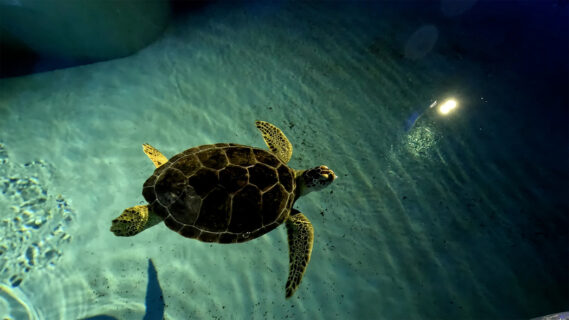 Two black-tip reef sharks, two bonnethead sharks and a green sea turtle will highlight the stunning 270,000-gallon One Ocean aquarium at the center of the Galápagos Islands complex. These charismatic species will join a school of stingrays and hundreds of colorful fish in a coral reef designed to showcase the dynamic underwater world surrounding the Galápagos Islands. While not yet in Houston, a colony of 15 Humboldt penguins will soon make the trip to the Bayou City from several zoos and aquariums around the country. Galápagos penguins—among the smallest of all penguins—are threatened by overfishing, ocean pollution and climate change, and are strictly protected on their native islands. It is the most endangered penguin species in the world, with an estimated population of less than 2,000 individuals. Because of this status, closely related Humboldt penguins will represent the species in the Zoo’s new habitat. 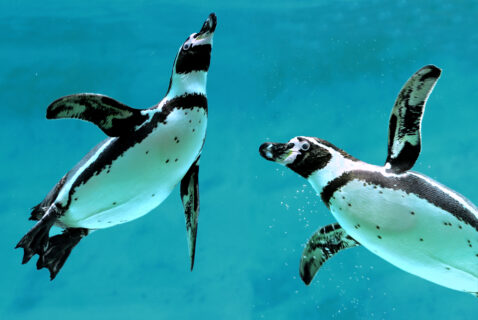 The Houston Zoo is dedicated to education, conservation, and the well-being of all its animal residents. The funds raised through the centennial campaign will be utilized to support these endeavors, through the construction of new exhibits and the care and protection animals at the Zoo and in the wild.