Zoo Honored with Awards in Exhibit Design and Conservation 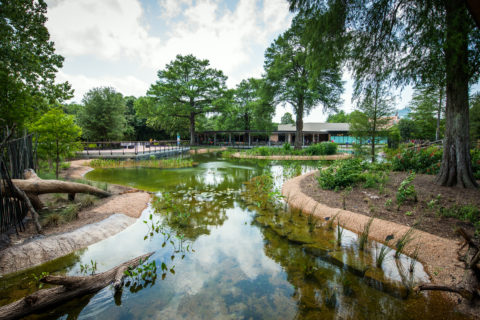 Today, the Association of Zoos and Aquariums (AZA) publicly announced that it recognized the Houston Zoo with two Top Honors during the 2021 AZA Virtual Annual Conference in September. The Zoo received Top Honors in the Exhibit Award and the William G. Conway International Conservation Award.

“Even amidst a pandemic, AZA members continue to do exceptional work. Our Honors and Awards program recognizes and celebrates those achievements,” said Sue Chin, Vice President of Planning & Design and Chief Architect at the Wildlife Conservation Society, and Chair, AZA Honors and Awards Committee. “AZA-accredited zoos and aquariums are leaders in animal care, conservation, education, community outreach, and more. The communities where these award-winning facilities are located should be proud of their achievements!”

The Houston Zoo was praised for its work on the Kathrine G. McGovern Texas Wetlands and Cypress Circle Café which opened in 2019 right in the heart of the nearly 100-year-old zoo. The new Cypress Circle Café was designed to embrace an existing Mid-century Modern shade structure overlooking the former duck pond. Surrounding the former duck pond is the Kathrine G. McGovern Texas Wetlands. This new exhibit brings together three native Texas species—bald eagles, whooping cranes, and American alligators—in a lush wetland habitat. Thanks to the Endangered Species Act and the efforts of Texans, these three species, once close to extinction, now thrive in the Lone Star State. In the heart of the Zoo on the site of the former duck pond, was created a true wild wetland. Guests enjoy a boardwalk stroll and experience a close-up view of these beautiful animals that Texans have helped save from extinction.

The Houston Zoo was also recognized alongside partners Naples Zoo at Caribbean Gardens, Naples, Fla. And SeaWorld Parks and Entertainment for their joint work with the Giant Armadillo Conservation Project in South America. The giant armadillo (Priodontes maximus) is the largest armadillo species in the world, with a wide distribution throughout various South American habitats. Due to their cryptic behavior, low densities, and slow population growth rates, giant armadillos are rarely seen and until recently, very little was known about them. In 2010, the Giant Armadillo Conservation Program (GACP) successfully established the first long-term ecological study of giant armadillos in the Brazilian Pantanal. In 2015 the project expanded activities into the highly disturbed Cerrado biome and in 2017 to the Atlantic Forest. The main goal of the project is to utilize field data to inform conservation outreach and planning. The project has developed many creative conservation initiatives involving a diversity of stakeholders to safeguard the species future. 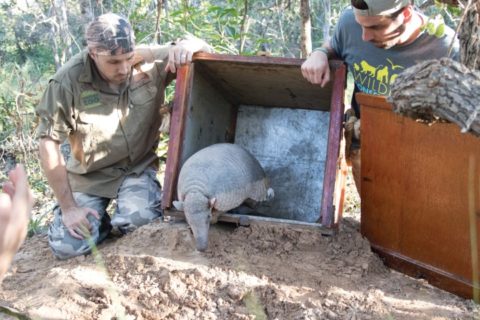 The Houston Zoo, Naples Zoo at Caribbean Gardens, Sea World Parks and Entertainment and numerous AZA institutions supporting the Giant Armadillo Conservation Program are proud to be partnering with this important effort and helping to bring this little-known species to the forefront of conservation across South America.

To learn more about AZA’s Honors and Awards, visit www.aza.org/honors-awards.