In less than two weeks, you’ll have the opportunity to explore the Houston Zoo’s new Kathrine G. McGovern’s Texas Wetlands habitat! As you embark on your first adventure through our new exhibit, you’ll meet a number of incredible species that are both native Texans and species being saved in the wild, thanks in part to your Zoo visit. While you may encounter some well-known animals like the bald eagle and American alligator, you’ll also catch a glimpse of one of our feathered friends that might seem less familiar – the whooping crane. 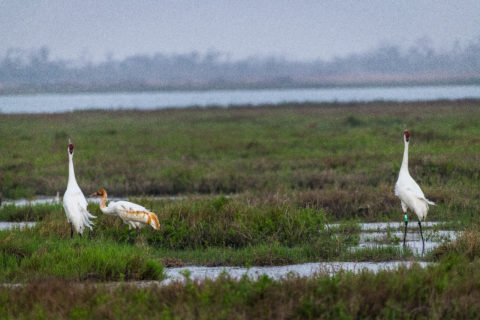 Standing at nearly 5 feet tall, with a 7-foot wingspan and bright crimson red accents on the top of their head, the whooping crane is hard to overlook. In the 1940’s the whooping crane population had dropped to below 15 birds, but thanks to many dedicated individuals and protection efforts, this number climbed to more than 500 birds in the wild reported just last year. The only remaining self-sustaining population of whooping cranes is the naturally occurring flock that breeds in Canada and winters right here in Texas. As fellow Texans, it is our responsibility to not only keep these birds safe, but to help them thrive, which is why the Houston Zoo partnered with the International Crane Foundation (ICF); a team that works with diverse partners in Texas to protect the coastal ecosystem, its wildlife, and the vital coastal economy. As part of this partnership, we helped to establish a Whooping Crane Outreach Coordinator position in Rockport, Texas and work closely with the team down south to help the public develop awareness and caring for whooping cranes.

Most recently, the Houston Zoo led a human behavior change training workshop for our partners at ICF as well as representatives from San Antonio Bay partnership, USFWS, TPWD, Texas Sea Grant, and Mission-Aransas National Estuarine Research Reserve to design effective human awareness campaigns aimed at reducing threats to whooping cranes. The training covered human behavior change principles- principles we use here at the Zoo to encourage everyone to not only care about wildlife but to easily adopt everyday actions that will help save animals in the wild (things like using reusable bags and water bottles, or skipping the straw). The whooping crane team asked for assistance with reducing the number of abandoned crab traps in Texas bays. 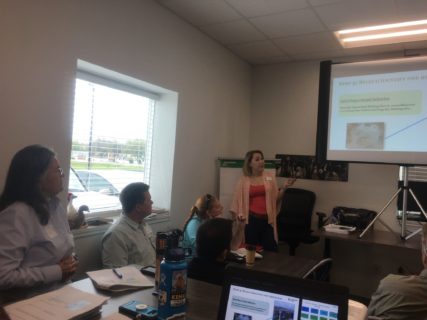 Understanding why crab traps are sometimes abandoned and helping the crabbing community to solve this problem is a key piece in helping blue crab populations to rebound. Traps that are left in the water unattended can accidentally capture crabs that will never be claimed. This means that more individuals must be caught to meet the demands of the seafood market, and as a result there are less animals in the ocean working to keep it and species population healthy. So, less abandoned traps in the water means more crabs that can be caught in a sustainable, ocean-friendly manner, and more food for the whooping cranes. 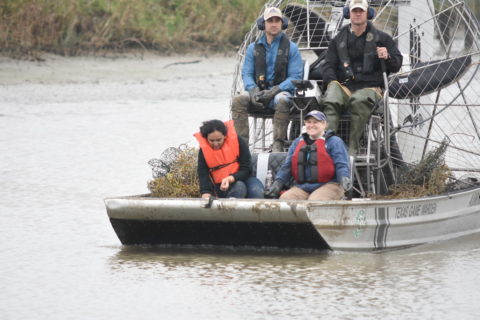 The team’s work to prevent traps from becoming abandoned is just beginning, but in the mean time, the Houston Zoo and each of these organizations will continue to protect native wildlife and local economies by participating in crab-trap cleanups every February during the crab trap closure period. This year the Houston Zoo and Galveston Bay Foundation removed and properly disposed of 141 traps, saving over 2,300 blue crabs and many other animals like otters that can also get trapped in the abandoned traps.

We encourage you to come see this iconic species up close at the Houston Zoo starting Friday, May 24th and learn what steps YOU can take to help save this native Texan. And remember, just by visiting you are already helping to save whooping cranes in the wild! We thank our partners at Chevron for helping us to protect wetland wildlife like whooping cranes.

Can’t get enough of the wetlands? Join us on July 12th for Camp Zoofari for Adults! We’ll explore the biodiversity of Texas and learn about native Texas animals like American alligators, bald eagles and whooping cranes. Meet the keepers that care for these animals and learn about our newest Zoo residents. Spaces are limited – reserve your spot today!