What the heck do they do, anyway?  From filtration to chemistry, this blog series is a behind-the-scenes look into the Zoo’s most mysterious department.

As you may recall from Part I, Water Quality Department staff members were preparing to plant new floating islands in the CZ Koi Stream.  The islands were to serve a dual purpose:  1) they would provide space for plants that would help remove nutrients from the stream, and 2) they would house tiny aquatic invertebrates called amphipods.  Why?  To help keep our exhibit free of filamentous algae. 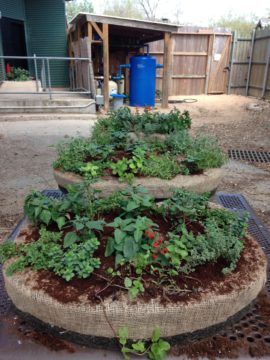 Our three floating islands arrived at the beginning of the month.  Being science nerd types, all of us Water Quality folks were eager to open up the boxes and get these things planted!  They were made of a brown mesh (the material was very similar to a scrubber pad) and had a coating of buoyant foam on the bottom to help with flotation.   The island planter holes were pre-cut and were to be filled with a special soil.

We chose a selection of pollinator-friendly plants for our island experiment, mostly herbs like catmint, oregano, thyme and African Blue basil for the bees, but also included some Texas salvia, bee balm, and Cardinal flower for hummingbirds.  With the expertise of Jeff in the Zoo’s Horticulture Department, we got all three planted up and ready to go.  We kept the islands out of the Koi exhibit for a couple of days to water the plants, but with rain in the forecast they were ready to set sail! 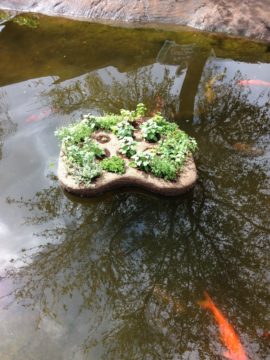 Once the islands were in place we watered them by hand for a little over 2 weeks, just until the roots had a chance to start growing through the mesh into the stream.  After that they did just fine without us, but seemed to be putting most of their energy into root growth – there wasn’t much visible change in plant size since we planted them a month earlier.  We added a small group of amphipods to the stream during this time since we were seeing a hint of filamentous algae growth.  By mid-April another clean-up crew arrived… tadpoles!  Hundreds of them!  A few pairs of Gulf Coast Toads evidently found their way into the Koi Stream to spawn – thankfully these tadpoles are voracious algae-eaters.  Towards the end of the month, many of our island plants were in bloom.

The islands are really picking up speed, although one of them is not doing as well as the other two… Horticulture is called in to investigate.  Jeff finds signs of mites and thrips, tiny arthropods that feed on plant juices and stunt plant growth.  Two of the islands are temporarily removed and sprayed with horticultural oil, a substance bad for small pest insects and mites but safe for other insects once it dries.  Meanwhile, more tadpoles have arrived (the last batch is long gone – Gulf Coast Toad tadpoles go through metamorphosis and turn into tiny toadlets in about 3 weeks).  Between the tadpoles and amphipods, the hair algae growth is kept at bay.

Here we are a little over three months later, and our islands are really filling in.  The plants are blooming and attracting many species of bee, beetles, dragonflies, butterflies, and damselflies.  Just as we had hoped, the Koi stream is free of hair algae even in the blazing Texas sun.  Our biological one-two punch is working!  Now that the tadpoles are mostly gone for the year, we will add more amphipods to increase the current population and keep up the momentum.  Encrusting green algae are present on the sides of the stream, but this is perfectly natural in aquatic ecosystems.  Contrary to popular belief, a modest population of green algae is actually an indicator of good water quality.  This small amount of algae plus our thriving island plants are removing nutrients from the water faster than the fish are producing them, even though the fish are fed generously a few times per week.  Koi Stream water samples are analyzed monthly by our department; the water chemistry is not only excellent, it’s among the best in the Zoo. 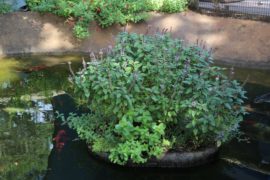 Our main goal with this experiment was to achieve pristine water quality and clarity, and establish a healthy fish, invertebrate and plant community – we reached this goal faster than we expected, and with no chemicals added.  Of course we have an entire summer ahead of us, but we expect to maintain the health and beauty of the Children’s Zoo Koi Stream just by letting nature take its course.  We invite you to visit the Houston Zoo this summer and hang out on the Koi Stream bridge to check out our progress!