This week, our sea lion team went above and beyond for wildlife. For two years, this group of Houston Zoo keepers has made regular trips to the Surfside jetty, picking up trash and recyclables. The team also spends time speaking with fisherman and visitors on the jetty about the dangers that discarded monofilament fishing line poses to marine life like sea lions and sea turtles. This self-started program has included Houston Zoo staff from 14 departments and resulted in the collection of 729 pounds of trash, 529 pounds of recycling, and 114 pounds of discarded fishing line. 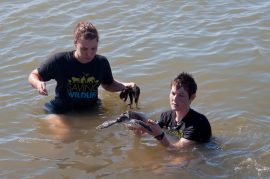 While working on the jetty this Wednesday, our sea lion team rescued a sea turtle that had been entangled in fishing line. Houston Zoo sea lion keeper, Heather Crane, was on the jetty and helped free the turtle. We asked Heather to share her experience and here’s what she had to say.

“On October 30th, a group of dedicated volunteers and I went to the Surfside Jetty for a scheduled sea lion monofilament team collection. As we made our way out to the end of the jetty to begin our work, we passed by a number of fishermen, surfers, and people enjoying taking in the sights. Our monofilament cart and team seemed to generate a lot of attention by the jetty-goers and we were able to share our story of why we were there to clean the jetty. Not long after, civilians jumped in and joined the efforts to collect trash and fishing line from the jetty sidewalks. It has been a few months since I have visited the jetty myself and I was so impressed by the difference in the vibe I received from the fishermen. After 2 years, I notice a definite difference in the attitudes and perspectives of the people who frequent the jetty the most. Originally, it seemed people were unsure of why we were there and what our intentions may be. But yesterday, I received an overwhelmingly wonderful and warm welcome and acts of gratitude from the jetty-goers. Several fishermen stopped to thank us as we emptied the monofilament bins placed on the jetty for recycling fishing line.

As we collected fishing line, trash, and recyclables, a civilian reported to one of our volunteers that there was a turtle that was possibly entangled. We immediately notified the sea turtle hotline (1-866-TURTLE-5). Soon, we received instruction to monitor the turtle and have someone stay with it and report any changes. From the shore, it appeared that the green sea turtle was entangled in fishing line and was struggling to free itself. As we awaited the arrival of NOAA scientists, the turtle appeared to becoming more stressed and more entangled. As it fought to get free, it only exacerbated the problem. After thoughtful deliberation and safety planning, it was decided that if this turtle was to survive, it would be absolutely necessary to enter the water and extract the turtle. NOAA never recommends or requests members of the public to enter the water to extract a turtle due to the in-water dangers that exist. When I reached the turtle, I found it to be anchored in two spots to the bottom. Fishing line wrapped around the hindflipper, the neck, and tightly around the front left flipper. We removed the loose line around the neck and hind-flippers, but awaited help from the NOAA scientists to remove the front flipper entanglement to prevent further damage of the flipper that probably resulted from an initial entanglement. 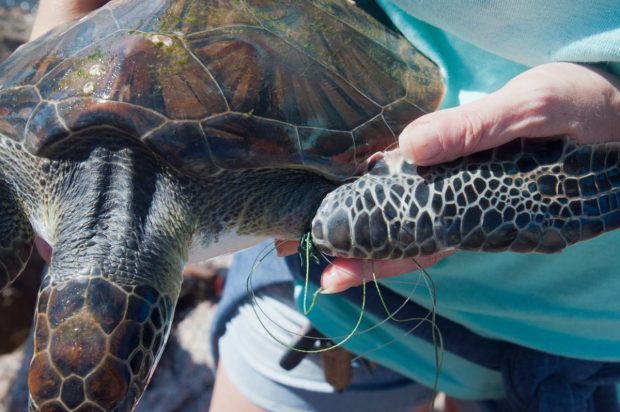 We waited for help to arrive and continued monitoring the turtle. During this time, we were able to educate onlookers about the importance of recycling fishing line and how to contact the turtle hotline to report injured turtles. It was a great teachable moment and seemed to captivate and inspire this audience the turtle invited. When NOAA scientist, Lyndsey arrived, the remaining fishing line was removed and he was taken to the sea turtle facility in Galveston for further evaluation and treatment. It was a special day and I could not be more proud of the team that collaborated to make the rescue successful. For me, this is a testament and reminder to the importance of the work we do to keep our waterways clean for animals in the wild, and it makes me proud to work for the Houston Zoo.” 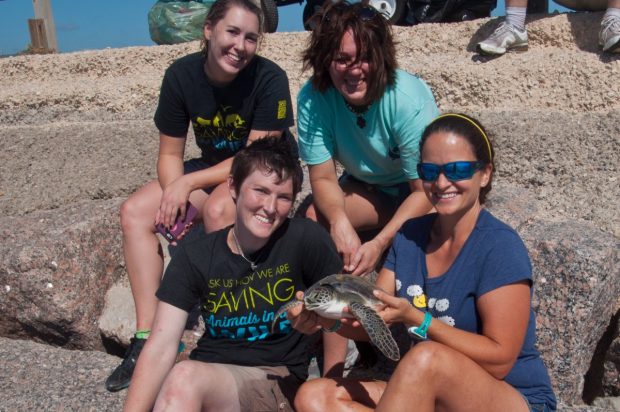 Great work Heather and sea lion team! We want to take a quick moment to reiterate that if you see an injured sea turtle, please immediately dial NOAA at 1-866- TURTLE-5. NOAA’s expert biologists are on-call 24/7 to respond and advise to reports of hurt or nesting sea turtles. Thanks to our friends and conservation partners at NOAA for helping this turtle get ready for another chance in the wild.