What if I were to tell you that unicorns – those magical, mystical creatures from fairy tales actually exist? It may not be identical to the image you have in your head, but it is as real as you and me, and you can see it here at the Zoo! Affectionately known as the “chubby unicorn”, rhinos are a hint of magic in our ordinary world, and, like all precious things, rhinos need protection, both at the Zoo and in the wild. 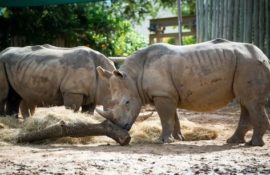 In Namibia, our partners at IRDNC (Integrated Rural Development and Nature Conservation) have been working to save rhinos since the mid-1990s, when community conservation became an official component of government policy. By teaming up with local community leaders, IRDNC has been able to take action to stop widespread poaching of wildlife, including the black rhino. This conservation project employs local people to guard wild rhinos and creates incentive programs that provide support for local villages that protect rhino populations. To put it simply, if local people see a direct benefit from having rhinos in the area, they will protect them, and the more eyes watching over the rhinos, the safer they are! The Houston Zoo supports IRDNC’s efforts by providing funding for communication and outreach events, as well as day to day Rhino Ranger operations, including salaries and equipment maintenance which makes it possible for the rangers to effectively monitor rhino populations. In 2017, the team set a baseline for rhino sightings and are working hard to see that number increase by 10% this year through their patrol work. 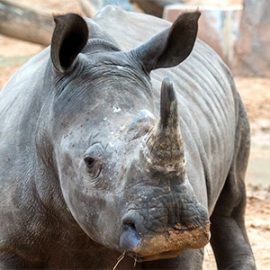 If you have ever wondered what it was like to be a rhino ranger, just ask our rhino keepers here at the Zoo. While they may not be monitoring and protecting rhinos in the wild, they are constantly monitoring the health and behaviors of rhinos at the Zoo – collecting information that can help to inform work being done to save this species around the globe.  In many ways, their jobs mirror one another, and ultimately boil down to a common goal – saving rhinos! The most important part of a rhino keeper’s job here at the Zoo is caring for our rhino trio who act as ambassadors for their wild counterparts. George, Indy, and Mumbles play a very special role as they get to connect with each and every one of our guests and show us all just how magical and truly unique they are. By visiting our rhinos you are supporting this species in the wild through the purchase of your admission ticket, and we hope an encounter with these guys inspires you to continue to save wildlife even after you leave the Zoo.

To learn more about how you are saving rhinos in the wild, find out all about our rhino trio, and meet the keepers who care for these rhinos each day, make sure to join us on Saturday September 1st for a member morning featuring, you guessed it, RHINOS! If you aren’t able to join us this weekend, keep an eye out on the schedule for our upcoming Rhino Spotlight on Species event on September 30th. After all, when you see them, you save them. See you at the Zoo!