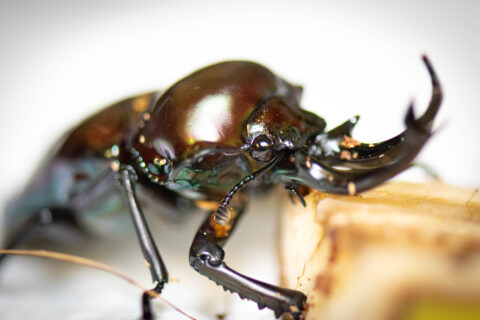 For the first time in Zoo history rainbow stag beetles successfully hatched in the Houston Zoo’s Bug House. The rare beetles are native to Australia and New Guinea and their name comes from their iridescent exoskeleton, believed to be used to confuse predators in the wild. Guests can learn more about the rare rainbow stag beetles during Insect Week, June 21-27, by visiting them in the in the John P. McGovern Children’s Zoo Bug House, next to the red panda habitat. 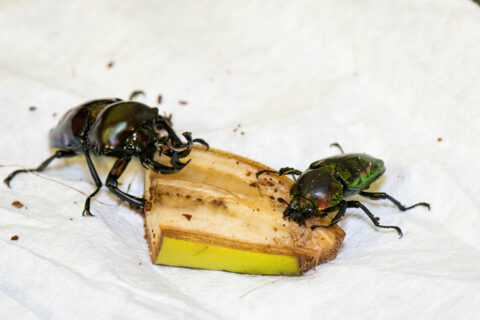 This species of beetle has several color forms including pink/green, blues and purple. Male rainbow stag beetles can reach a size of 70 mm and have long pincers used to joust over females. Meanwhile, females are smaller, reaching a size of 46 mm and have a line down the middle of their head. Females also have much smaller pincers used to create holes in rotting wood in which to lay their eggs. 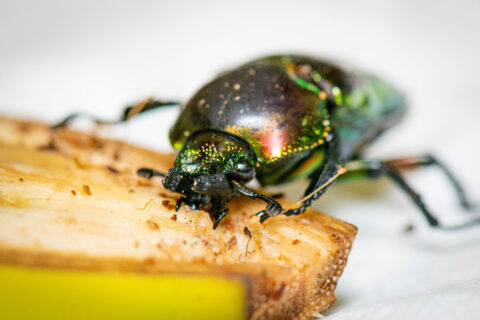 The time a beetle transforms into an adult is a complex and delicate system that takes place inside wood such as tree branches or trunks. Once the female lays eggs, the eggs will double in size and hatch 10-14 days later. The rainbow stag beetle spends at least six months as a larva feeding on the wood in which they were born and will molt three times before becoming an adult by pupating. When they emerge, their wings are soft and white and can take up to a week to color up. This species is most visible when they fly, and birds are their natural predators.