The Houston Zoo has an exciting announcement to share–our capybara, Squirt, is expecting pups this March. Native to Central and South America, capybaras are the largest rodent in the world. They are related to the guinea pig and weigh 50 times as much. Capybaras also are excellent swimmers and can stay underwater for up to five minutes.

Squirt was born at the Houston Zoo in 2015 and has been working closely with her trainer, Memory, since she was very young. Squirt enjoys participating in training sessions because she is very food motivated and likes interacting with her keepers.

As a first-time mom-to-be, working closely with her animal care team is important, including introducing Squirt to the idea of standing still while the Zoo’s veterinarians perform abdominal ultrasounds. She caught on quickly and learned this behavior in about four weeks. Voluntarily participating in her own medical care, including ultrasounds, has allowed the veterinary team to closely monitor her pregnancy and perform ultrasounds every few weeks. Her animal care team also weighs her regularly.

Hoofstock Keeper Memory shares, “I’ve been working with capybaras for about eight years now and I really enjoy all of their personalities, especially Squirt. I actually took an interest in training capybaras because when I was a teenager and worked in our Zoo Crew program, the keeper I primarily worked with was the capybara trainer at the time. Squirt is a is a very social capybara and one of my favorite things to do is give her scratches. She LOVES it and fluffs up all of her fur.”

Capybara gestations are about 4-5 months long, and this will be the third litter we’ve had at the Houston Zoo in the past 10 years. Zoo officials are cautiously optimistic that Squirt’s pregnancy is advancing normally and on schedule. 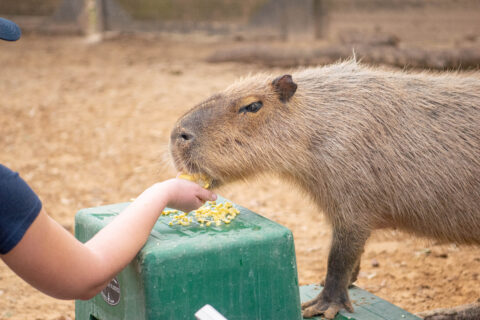 As our teams continue to monitor Squirt, one of the biggest indicators they look for when she is about to go into labor is if she reduces her food consumption and separates herself from the rest of the capybara group for privacy. She will give birth behind the scenes in our South America’s Pantanal exhibit under the supervision of her keepers and veterinary staff. Squirt will have access to multiple stalls that include soft substrate (sand and other bedding materials) to give birth on, along with cameras, for her staff to monitor her progress while still giving her privacy.

After delivery, the new mother and her pups will undergo post-natal exams and spend several days bonding behind the scenes. When the capybara pups are born, the Zoo’s hoofstock team looks forward to watching them share several key moments that will prepare them for their public debut. Making sure the pups nurse within the first few hours, as well as walking and moving comfortably are important milestones. The pups will rely on Squirt’s milk for several months, but they may start eating solids within the first seven days because their teeth develop rapidly.

The Houston Zoo wildlife partners in Brazil are focused on the conservation of many species guests see at the Houston Zoo. Working with local landowners to protect habitat in the Pantanal and supporting municipalities planning to reduce wildlife-vehicle collisions on major roads across the region.