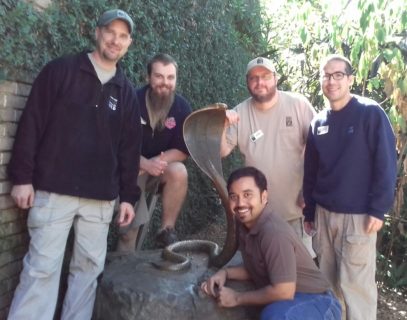 The Houston Zoo will be hosting the Houston Venom Conference this month – created in 2013 the conference serves to educate physicians, nurses, EMS professionals, and nature enthusiasts about the management of snakebites.  This is a lifesaving conference!  Murthy Kantimahanti has been the Houston Zoo’s snake (and other wildlife) conservation partner in India for the past four years, and will be flying to Houston to attend, and be a keynote speaker, for this incredibly important conference.  His conservation project, the Eastern Ghats Wildlife Society (EGWS), has a strong focus on ensuring local people can coexist peacefully with wildlife, specifically snakes (king cobras, etc.), but works on conservation efforts for all wildlife (tigers, elephants, fishing cats, otters etc.) in the Eastern Ghats, India.  Murthy’s snake bite research has revealed that there is a percentage of people in India dying from dry snake bites (meaning no venom is released), due to the fear people have of snakes. This fear is so strong that upon being bitten, the individual dies from a heart attack or other complications.  To that end, Murthy has focused his efforts on dispelling the fear around snakes and educating locals on the value of these animals and how they can live safely along-side them in India.

Guests will have the opportunity to meet Murthy on Monday, April 29th at 10:30am during a keeper chat at the Reptile House.

Houston Zoo and EGWS achievements in 2018: