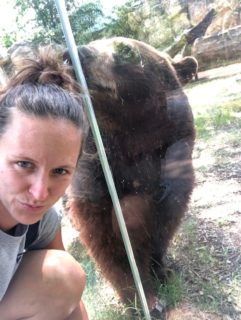 Meet Alicia Wedel, she’s one of our Carnivores zookeepers and has been at the Houston Zoo for over two years. She enjoys working with big cats, but has worked with a large variety of animals, including alligators, birds, great apes, and more!

1. Where did you start your Zoo career?
I started my career with an internship at the Topeka Zoo. I worked on Saturday’s while in college. The very first animal I met was a male giraffe and it changed my life. I remember, after my first day, calling my parents and talking their ears off about how amazing it was. I knew from the beginning that my heart belongs to exotic large cats. While interning there, the first large cat I met was their lions and I remember wanting to cry I was so happy. I knew there was nothing else I ever wanted to do. After that internship I graduated and moved to the Omaha Zoo to do a full-time internship in multiple departments. That’s where I realized I like different species of animals I never realized I could like such as ungulates and penguins. After those internships, I got a full-time job at the Kansas City Zoo where I worked for 8 years. I worked with a large variety of animals from ungulates, great apes, small carnivores, lions, birds, alligators, and so much more. I have a saying that if you name it, I have probably interned or worked with it outside of fish and marine mammals.

2. What is your favorite thing about working at the Houston Zoo?
The animals bring amazing amounts of joy into my life. Seeing an animal go through life stages such as becoming a mom or growing up from a baby can bring you so much pride. The interactions I have with the animals bring me fulfillment that is indescribable. The animals also have enormous personalities. Watching them be silly, mischievous, incredibly intelligent, angry, and much more. Putting the work in to be able to know each of them individually and finally figuring out who THEY are and building that bond of respect brings a sense of happiness to my everyday life.

3. How did you know that you wanted to be a zookeeper?
I think I was born wanting to do something with animals. I was the small kid in class that never wanted to read the traditional books such as Little House on the Prairie but I preferred books on snakes and African Painted Dogs. I was always in streams picking up small animals or grabbing bugs that I probably shouldn’t have been. We also always had a tradition in our family of going to the zoo on Memorial Day. I remember it was one of my favorite days of the year. I just remember being so excited to go and see the animals. 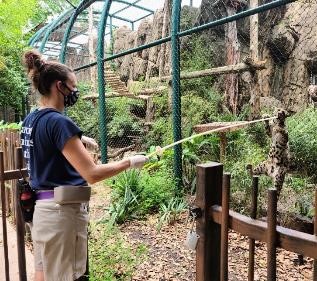 4. What does a typical workday look like for you?
A lot of guests that visit the zoo feel that keepers spend most of their day either interacting with the animals directly, feeding them, or cleaning up after them. Which is something we of course do, but our job is much more complex. We do spend a lot of our day making sure that our animal areas are clean and disinfected to prevent any form of disease, but we must also be a champion for our animals. Unlike humans, animals communicate their needs differently so it’s our jobs as keepers to figure out their form of communication.

We interpret all that information through reading their behavior, predicting any issues prior to them happening and preventing them, setting the animal up for success in the future such as when they become geriatric, and much more. All of this includes what you might think, such as training for a medical procedure, diet preparation, enrichment, and behavioral observations. But it also means mowing, cutting down trees, painting, minor maintenance repairs, cobwebbing, moving substrate, and much more.

There is also a lot of computer work involved in being a keeper. We are analyzing information from the animals such as behavior trends through computer programs, diet change needs, enrichment analysis, welfare analysis, interdepartmental communication, and keepers are always continuing education. Just like every industry, keepers are always continuing to learn and grow to be better for the animals. Lastly, keepers get to spend time engaging with guests. This is the part of our job that can be the most rewarding. Keepers spend time giving keepers chats and training demonstrations to try and excite the next generation of conservationists while educating them on how they can help save animals in the wild.

5. What is the most challenging part of being a zookeeper?
A lot of people probably think it’s the heat, rain, bugs, or other elements but it is leaving work at work. Zookeeping isn’t just a job, it’s a passion that reaches down in the depths of our souls. It is part of our identity and almost a way of life. There is a saying among keepers, and especially here in the carnivore department, that we follow: “Our quality of work is their quality of life.” At times you are so determined to create the highest quality of life that you forget to take care of yourself. It is very difficult to not worry about the animals when at home. Especially when an animal is sick, due to give birth, or you have new babies that might get into trouble. As keepers we will get up in the middle of night to come check on an animal, stay at the zoo in an emergency, go without sleep or food, and everything in between. All those holidays, nights, hurricanes, power outages, COVID-19, and anything else, we are here making sure our animals are healthy.

6. Have you traveled abroad to do conservation work?
I went to Greater Kruger National Park South Africa to help do research for endangered rhinoceros with Transfrontier Africa and The Black Mamba anti-poaching unit. During my 2 weeks stay, I assisted in rhino monitoring, walking an anti-poaching patrol, learning the daily activities of the management camp, learning the computer software of the anti poaching software, and much more. It was amazing to be part of an organization that not only was trying to save rhinos in the wild but was also trying to educate the next generation with the Bush Babies education program and empower women. The Black Mamba anti-poaching unit was one of the very first all women anti-poaching units. While there I also have life changing experiences such as figuring out how to hitch a SUV out of the middle of a pride of 12 sleeping lions, watch a camp dog get eaten by a crocodile, have to detour your on foot anti-poaching patrol due to lions in the area, and the many nights by the camp fire making memories with friends from around the world.

7. When you aren’t at work, what are some of your hobbies? Do you have any pets?
One of my biggest hobbies is hiking with my dog Marvin. I love being out in nature. I would prefer to be outside over inside. I love to explore new areas and seeing wildlife. Last year I hiked the Grand Canyon, Zion National Park, and Bryce Canyon. My dog Marvin enjoys walking every day and like many other pet owners he feels like we can’t walk enough. I hike with him on trails over an hour a day and even longer on my weekends. I also have a female dog named Brooklynn who is very much a diva and a fish named Blanch. Though my love of working with exotic big cats is strong, I have never actually had a pet cat.

8. Do you have any animal-related tattoos and what is their significance?
Yes I have 4. I have one on each of my feet that are sea turtles. The left foot has bigger sea turtles that represent the “moms” and the right foot has smaller sea turtles representing the “babies.” The significance of these 2 tattoos is just my love of sea turtles. I have always had a love for them, though I have never worked with them. 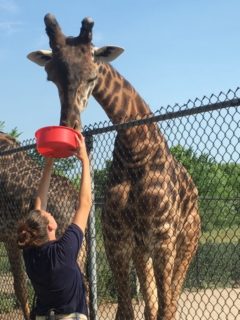 My second tattoo is a silhouette of a giraffe on my right hip. Which goes with my other tattoo on the right side of my rib cage which is Eddie the giraffe’s hoof prints. Both tattoos are for a giraffe named Eddie that I worked with at the Kansas City Zoo that died. He holds a very special place in my heart. He was a very shy giraffe that fought his way into the world and overcame a lot of obstacles. I watched that giraffe go from being so shy you couldn’t even look at him without him being so nervous to a confident teenager that took years of work to build trust in our relationship. It reminds me of the number of times I was so frustrated I wanted to scream but the thousands of hours I spent helping that scared “little” guy become the amazing giraffe he was. Some animals just crawl into your heart and never leave, and Eddie was one for me.

9. What is your favorite animal to work with?
Well, that’s like picking a favorite child. If you asked my team, they would probably say either Berani the Malayan tiger or Tesoro the jaguar. I would say both. I love them both dearly for different reasons. Both are goofy and silly and love to please keepers in their own way. When it comes to training, they are laid back and together we try our best (Don’t just blame them! : P) . Though they don’t always get it right, they sure try hard! Berani loves interacting with keepers and is such a sweetheart. He would spend all day chuffing and vocalizing at keepers if he could. While Tesoro I nicknamed “the hamster” due to his playful personality. He loves wiggling around on his back with his feet kicked in the area and playing with his toys all over the exhibit. He even has a favorite toy called a Tipsy Tom which I named Tom Tom. He will drag that thing around everywhere. 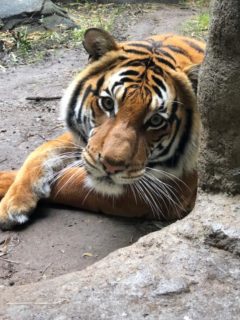 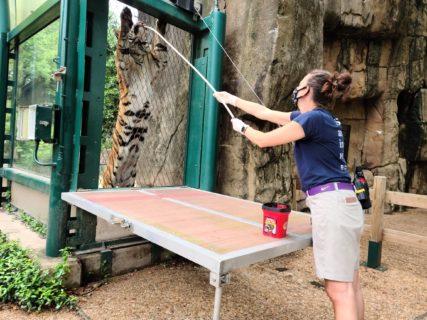 10. What is your secret talent or something most people don’t know about you?
I have run a lot of half marathons and completed 1 full marathon.