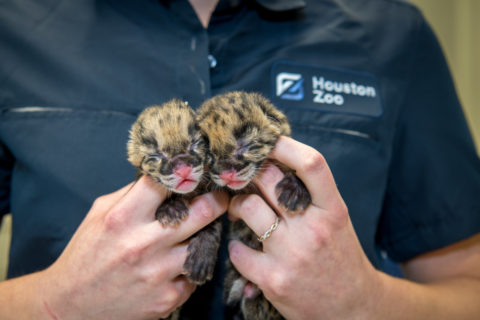 Many guests have been eager to see the newest feline additions at the Houston Zoo: clouded leopard cubs Nova and Luna. The pair was born in November 2019, and they immediately received 24-hour care provided by Zoo veterinary and animal care teams.

In those vital first days, the veterinary hospital keeper staff provided all the care in our special behind-the-scenes nursery area at the Zoo. The cubs were kept safe and warm in an incubator, since like most new babies, they couldn’t regulate their own temperatures. The temperature was monitored constantly and noted each time a cub was removed for feeding or their daily health checks by the veterinarians. The cubs got down to the serious business of nursing, sleeping and growing. 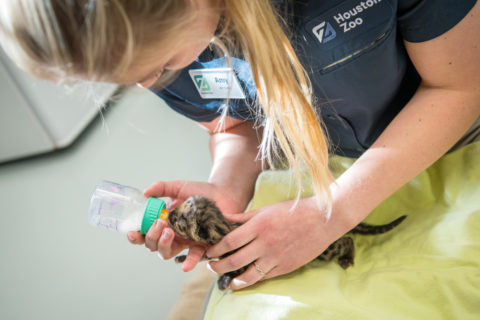 About a week later, carnivore zookeepers started to get involved. First through observing the vet hospital keepers, then slowly training in to handle the cubs themselves. Caring for baby animals, referred to as “neonates,” is delicate and detail-oriented business. Keepers wore gloves and scrubs over their uniforms and removed dirt-tracking shoes any time they entered the cub’s nursery. The cubs were bottle fed a specially developed formula every few hours, with amounts and times carefully considered and recorded. At each feeding, the cubs were also stimulated, meaning that keepers physically encouraged the cubs to produce urine and feces. Most kittens cannot do this on their own for several weeks after birth, so their mother (or in this case, team of ‘mothers’) groom their bottoms until they go. Again, each passing waste was recorded and analyzed.

When the zoo said 24-hour care, they meant it. For the first two months, every night a keeper stayed at the zoo to provide around–the–clock care and feeding for the cubs. Special shifts were organized between the two teams to provide continuous coverage. Each shift had a little overlap with the previous caretaker, so that keepers could chat about the latest developments in addition to reading the detailed records. The cubs’ ears began to open, followed by their eyes, just tiny slits at first. The cubs began to stand, then crawl, all the way to chasing and pouncing on each other. Their bottles grew, then meat baby food was added to the bottles, and finally they were given actual meat. The cubs were weighed each day to make sure that they were gaining weight appropriately, and they grew like weeds! 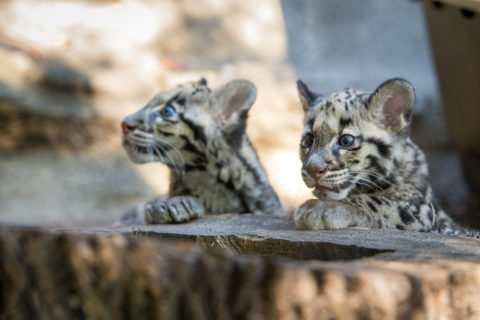 As the cubs became more active, they were given more space and things to interact with. First, they were given stuffed animals to snuggle with, which also eventually became wrestling companions. Other toys like balls and Kongs were added as they were deemed appropriate. Keepers introduced milk crates as places to hide, jump and climb. Bread crates were secured to walls to further encourage these natural skills and cater to their increasing desire to get to elevated places. Eventually, a jungle gym of logs and crates was created, and logs were hung as swings. The goals behind these playthings were to encourage natural behaviors and teach the cubs to become clouded leopards, a species who spends much of its time in the trees as adults. Clouded leopards rest, travel and even hunt from branches in forests.  Today, Luna and Nova gracefully navigate the logs in their habitats, using their sharp claws and long tails for balance. 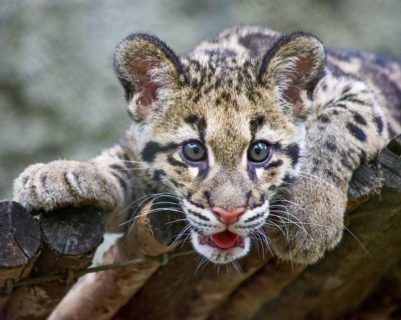 In late January, the cubs had their biggest life change yet: they moved from living behind-the-scenes at the Veterinary Clinic to their home on Zoo grounds with the other carnivores. From the quiet of their nursery to a big bustling building with other animals and the humans that take care of them. Clouded leopards are naturally very shy animals known for not liking change, but Nova and Luna apparently didn’t get that memo. They were running around their new home, playing and exploring within minutes of arrival. That’s not to say there weren’t scary moments, like the first time their new neighbor, Berani the Malayan tiger, roared. Or the first time they got to see Maya, the jaguar, nearby. Each time, keepers were impressed with how quickly the cubs overcame their fright and got back to the important business of playing. 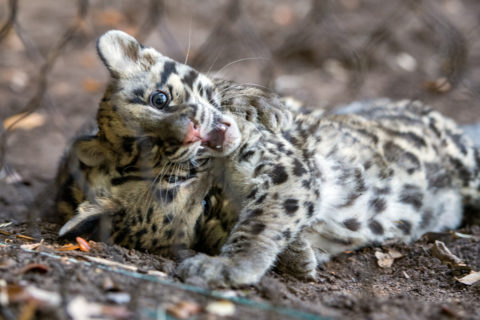 Safety is a primary concern when working with any animal, especially a predator. Clouded leopards may not be very large (females typically get to be up to 30 pounds, males can get to 55 pounds), but wild animals pack more of a punch even in a smaller package. Additionally, one of the things that makes clouded leopards unique among cats is their incredibly large canine teeth- up to 2 inches in length. These teeth are about the same size as those of a tiger, which is typically 10 times the size of a clouded. In fact, clouded leopard canine teeth are longer in relation to their skull size than those of any other living cat!

Luna and Nova now weigh just over 20 pounds each, and keepers weigh them regularly to monitor their growth. They are each fed about ¾ of a pound of meat a day, half in the morning and half later in the day. They are out in their zoo habitat full time now for guests to see during their Zoo visit. Their favorite activities are chasing each other and the birds that dare to fly by, as well as destroy any foliage trimmings that are delivered by the horticulture team. Watching them race along logs and rock work is a sight to behold!

This experience of hand raising clouded leopard cubs may have been a once in a career opportunity. The Carnivore and Veterinary Hospital keeper teams continue to be incredibly grateful to have been a part of helping Luna and Nova grow and thrive and look forward to their continued development. 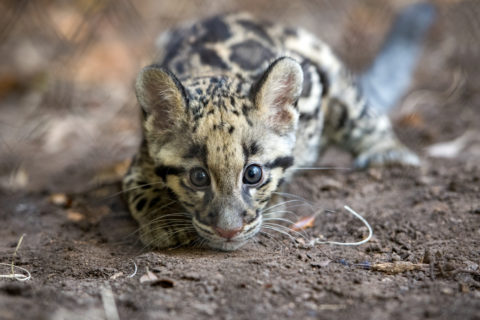