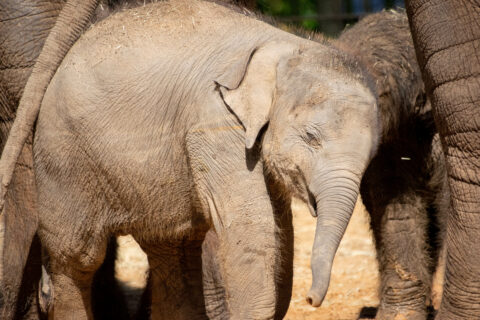 On March 10, 2021, the Houston Zoo welcomed Asian elephant Winnie to the herd. Winnie’s birth brought several firsts for the Zoo. She is the first, third-generation calf ever born in Houston. She is also the first-ever elephant calf born of artificial insemination at the Houston Zoo. Today, in a joint announcement, the Houston Zoo and Denver Zoo made public that Winnie’s father is Bodhi.

Bodhi is a 17-year-old bull elephant and tips the scales at 10,650 pounds. He is known to Denver fans by his long legs, and rambunctious personality. Bodhi is one of the five Asian elephants at Denver Zoo that makes up the largest all-male bachelor herd of his species in North America. Denver Zoo is a leader in researching the unique relationships bulls develop with one another to help inform conservation efforts in the wild. 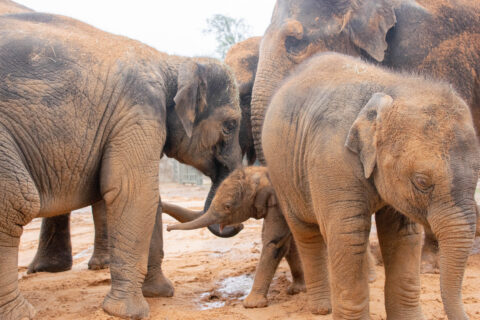 Winnie’s mother, Tupelo, is 10 and related to all the male elephants in Houston. Through her 10 years, Tupelo saw several calves born and with each new calf, she showed greater maternal tendencies, like standing watch over sleeping calves in the yard, offering to “play” nurse the calves by maneuvering them behind her front leg, and is one of the first to respond when a calf vocalizes. These traits, as well as her genetics, made Tupelo a great breeding candidate.

In the 96-year-history of elephants at the Houston Zoo, only natural breeding has occurred, with Tupelo’s father Thailand siring all the elephants born in Houston. Knowing that artificial insemination (AI) would be Tupelo’s only chance at motherhood, the Houston Zoo animal care professionals began the process of training her for the procedure in 2016 so that when the time came, she would be as comfortable as possible. Some of the training included desensitization to the medical process and being comfortable with multiple people moving and working around her.

One of the most important steps was training Tupelo to stand with her rear feet on elevated platforms to help position her body for a successful procedure. The team began the training with small, six-inch-high wooden blocks, working up to the 24-inch platforms that the Houston Zoo’s welding team designed and created, making sure they were the appropriate size and comfort level for the procedure. By 2018, Tupelo was fully trained for the artificial insemination and the team kept up weekly practice sessions to ensure she stayed ready.

The next step in the process was tracking her ovulation cycle so that specialists could be brought in for the procedure at the right time. The team collected daily blood samples when they knew she would be close to ovulation, in which there is only about a two-to-three-day window in which females can become pregnant. Tupelo’s first artificial insemination attempt occurred in early June 2019 and the Zoo received semen collections from multiple AZA institutions, including the Denver Zoo, over several days to increase chances of success. It was known that the chances of pregnancy on a first attempt were slim, but by collecting weekly blood samples, it was determined four months later that the first attempt was successful, and Tupelo was, indeed, pregnant. 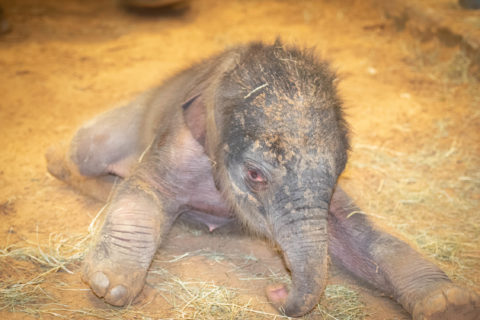 Just by visiting the Houston Zoo, guests help save baby elephants and their families in the wild.  A portion of each Zoo admission and membership goes to protecting wild elephants in Asia. The Zoo provides support, equipment, and training for local researchers to place satellite collars on wild elephants and track them in Asia.  The Zoo’s Malaysian conservation team is now watching over and protecting three groups of wild elephants with babies in Borneo. The data collected from these groups will inform future national protection plans for elephants.