Last week the Houston Zoo hosted Cecilia, Gaby and Megan from MarAlliance, our shark and ray conservation partner in Belize, Honduras and Panama for conservation education training. They spent time with many departments, including education, taking part in and learning about education programs for all ages. They also had the opportunity to visit with NOAA in Galveston and learn about the work they do with sea turtles, as well as see the saving wildlife murals along the Seawall. “It was great seeing all the work the Houston Zoo does to support conservation all over the world and feel very fortunate that MarAlliance is one of those organization,” said Gaby. It was a great week filled with collaboration and ideas about saving animals in the wild. 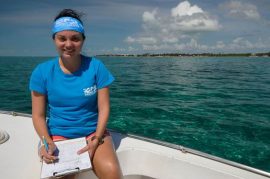 Following a Bachelor of Science Degree in Biology from the University of El Salvador and thesis focused on the epibiont communities on the roots of red mangroves in Barra de Santiago, El Salvador, Cecilia Guerrero returned to Belize to support monitoring and outreach and education programs with a range of marine conservation organizations including the Hol Chan Marine Reserve, the sea turtle conservation program with Flora, Fauna y Cultura de Mexico in Xcacel and the Toledo Institute for Development and Environment (TIDE). In 2012, Cecilia worked as the Outreach and Education Officer for the Southern Environmental Association and subsequently the Wildlife Conservation Society’s Gulf and Caribbean Sharks and Rays Program. Since April 2014, Cecilia has worked with MarAlliance as the Outreach and Education Coordinator to integrate research results into both public and focused outreach and education initiatives. 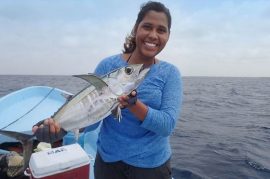 Gabriela (Gaby) Ochoa graduated from Texas A&M University, with a Bachelor’s in Marine Biology in 2012. During her time at A&M she worked at the Marine Invertebrate Lab, on a taxonomic study and description of a new species of Amphinomid (fire worms). She moved back to Honduras in 2012, and volunteered with several NGOs. In 2013 Gaby became involved with The GEF Small Grant Programme (SGP), as technical project assistant executing four development projects on the Pacific coast of Honduras. There she worked closely with fishers and turtle poachers to standardize data collection on Olive Ridleys (Lepidochelys olivacea). She moved to the Island of Roatan in 2014 and began a Hawksbill monitoring program (Eretmochelys imbricata). In 2015, Gaby joined the MarAlliance team, as Coordinator for Honduras and is responsible for coordinating long term baseline monitoring for marine megafauna in the North Coast and Bay Islands in Honduras. 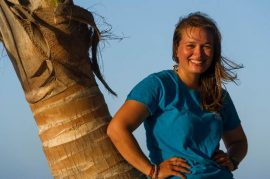 As the daughter of a marine animal veterinarian, Megan’s passion for marine wildlife developed early. She was involved with sea turtle and cetacean research, rescue, and rehabilitation for 12 years, including following Hurricane Katrina and the Deepwater Horizon oil spill. After graduating with a BSc in Environmental Science from the University of Southern Mississippi in 2012, Megan spent two years traveling as well as being a whale watching guide in the Pearl Islands of Panama and a research assistant with Latin American Sea Turtles (LAST) in the Osa Peninsula, Costa Rica. Her MSc research project with the University of Exeter-Penryn, under the guidance of Dr. Brendan Godley and Dr. Graham, focused on the spatial ecology of hawksbill turtles at Lighthouse Reef Atoll in Belize using passive acoustic telemetry. After receiving her degree, Megan moved back to Panama and now works as MarAlliance’s Coordinator for Panama.