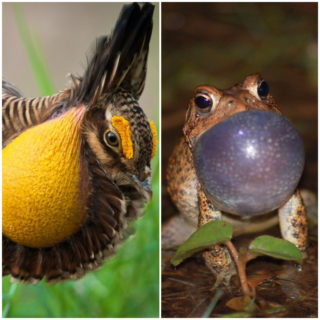 We’re excited to announce a new bi-monthly blog series, “Conservation Corner,” where we will take you behind the scenes and show you just what it takes to save a species in the wild. Follow along with us over the next few months as our staff gives you an inside look at both of our Texas-focused breeding and release programs. Coordinator Melissa Spradley will talk toads and teach you all about amphibian matchmaking. Coordinator Amber Zelmer will gab about grouse and show you just what it takes to get these fancy grouse to pair up and lay the next generation of eggs. We are excited to highlight these amazing projects and hope that you enjoy learning more about the exciting work going on at the Houston Zoo.

It’s February and love is in the air at the Houston Zoo! In fact, you might even be able to hear it. Take a look at these photos and you can see two very cool native Houstonians making some noise to attract their mates. This little brown amphibian and this secretive brown bird both get a little louder when it’s time to find a mate. The Houston toad inflates his throat pouch and makes a trilling call that lets the females know where to find him, while the Attwater’s prairie chicken inflates his air sacs, making a low booming sound that carries across the prairies. When calling for females, males of both species gather in groups, which also increases their chances of finding a mate. When the Houston toads are gathered together, their calls are amplified, making it easier for females to pinpoint their location. Male Attwater’s prairie chickens gather on shared booming grounds, called leks, where they each vie for a territory to call and display from, allowing females to evaluate multiple males at one time.

Although these species are very different, they are both extremely endangered native Houstonians and the Houston Zoo has been working very hard to conserve them in the wild. Before the city of Houston was established, it was once a vast stretch of coastal prairie that these animals both called home. With the spread of the city, the toads & prairie chickens had to move further and further to find suitable habitats for feeding and breeding. Neither species has been seen in the city proper since before the 1970’s. Surviving in isolated populations in different parts of the state, these species may be unfamiliar to many Texans, but they are an important part of Texas’ heritage and in need of our help to recover. Here at the Houston Zoo, keepers in our Bird & Herpetology departments have been working for many years to ensure that neither of these species disappears from Texas forever. While you may be familiar with some of the work that the Houston Zoo does to help protect animals around the globe, two of our most important conservation projects are focused on these species right here at home.