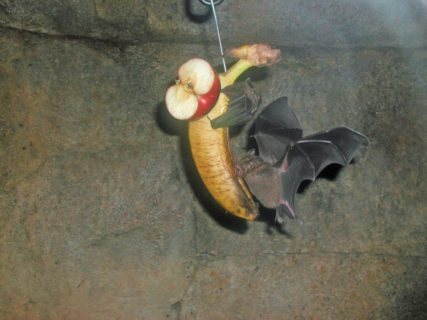 Bats usually invoke a sense of fear or association with disease, but bats are actually great allies and serve important roles in pest control, pollination, and seed dispersal. Here in Houston, we have 11 different species of bats, with the most common being the Mexican free-tailed bat, which has a large colony living under the Waugh Drive Bridge along Allen Parkway.

At the Houston Zoo, the Seba’s short tailed fruit bat, a bat native to the forests in Central and South America, lives in our bat cave inside of the John P. McGovern Children’s Zoo. These fruit-eating bats live about 10+ years and weigh less than an ounce – about the equivalent of holding 10 pennies in your hand. To care for our bats, we follow all necessary PPE requirements and wear masks, gloves, and eye protection.

The wild Mexican free-tailed bat colony can eat up to 2 tons of insects – including those pesky mosquitoes – every night when they emerge from the Waugh bridge. In addition, nectar-feeding bats act as great pollinators and help pollinate a variety of plants, including the agave plant, which relies solely on bats to pollinate and reproduce its flowers to make tequila, an ingredient found in a classic cocktail, the margarita. According to the USDA, over 300 species of fruit depend on bats for pollination, including mangos, bananas, and guavas.

For the past four years, Zoo staff have participated in conservation work with partner, Bat Conservation International, to listen to wild bats on Zoo grounds using acoustic monitoring devices. So far, we have recorded four different bat species here on Zoo grounds: evening bat, northern yellow bat, hoary bat, silver-haired bat, eastern red bats, and Mexican free-tailed bats. This data helps us understand when bats are most active, where they like to spend their time, and help with future protection efforts for wild bats. The next time you eat your favorite fruit or enjoy a tequila-based cocktail, remember that bats helped play an important role.