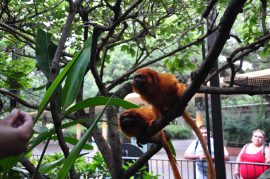 Like all lion tamarins, wild golden lion tamarins can only be found in Brazil but you can see Zuno and Coari at the Natural Encounters Department of the Houston Zoo. Zuno is a male that was born at the Houston Zoo 11 years ago and Coari is a 4 year old female that came to the Houston Zoo a year ago to be his companion. Coari and Zuno could not be more different, but they go together like two peas in a pod. Zuno has always been more skittish. He is hesitant to shift into holding and is shy around new people. He swears the world is about to come to an end when he spots the star tortoises moving around on the ground beneath him. Coari on the other hand is bold, daring, has a, let’s say “strong” appetite and is definitely a positive influence on Zuno. When Zuno vocalizes his fear of the tortoises, Coari can be seen going about her business grooming herself, sunning, eating, etc., while still giving Zuno comforting chirps until he calms back down. When keepers are shifting these tamarins, Coari comes in right away and shows Zuno that there is nothing to fear and that there are plenty of great rewards for shifting. Of course, Zuno never wants to be far from Coari. He has a long history of getting along well with the pygmy marmosets that share his exhibit. Coari has taken greatly to Zuno’s friends as well and now all four can be seen frequently playing together, grooming each other, or sunning together. 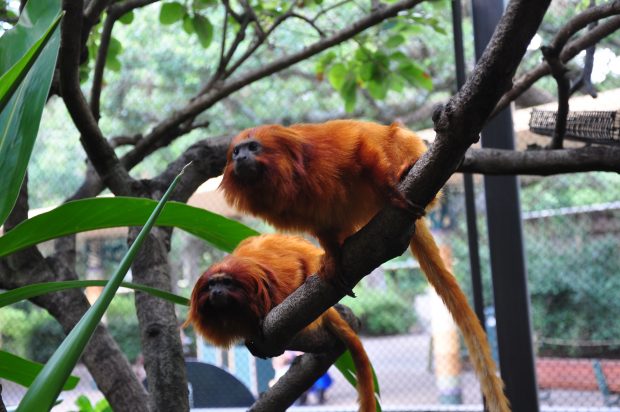 Now that you know Zuno and Coari, let’s talk some about wild golden lion tamarins, as they have an interesting conservation story… In 1992, the population ranged from 200-600 individuals, classifying them as critically endangered. They were divided in groups across 14 different forests with some being isolated to the forests they inhabited. The biggest problem they faced was deforestation and fragmentation of their habitat. Over the past 30 years zoological and conservation institutions have worked together through the Golden Lion Tamarin Conservation Program of the National Zoological Park to establish new populations through relocation of 47 individuals that were isolated, which would lead to their populations eventually dying out. The individuals were moved to the União Biological Reserve and the numbers were also increased by the reintroduction of captive born individuals to the wild. Approximately one third of the wild populations are descendants of individuals from this program. Currently, the population in União Biological Reserve is thriving and is projected to be at maximum carrying capacity.  In 2003 this population’s status was switched to endangered. There are now approximately 1,000 golden lion tamarins in the wild, with few suitable habitats left to expand the population to. If they inhabited all suitable areas, the population would most likely still remain below 2,000 individuals, which is enough to save the species in the short term, but not enough to have this species around for decades to come.

At this point, the key to saving this species at this point is continued population management and reforestation to connect the fragmented pieces of habitat.

So what can you do? One of the most fun ways you can help is visiting Zuno and Coari, where part of the money paid for each Houston Zoo ticket goes directly into conservation. You can change your everyday practices by reducing, reusing and recycling paper.

You can also donate directly to the cause through Save the Golden Lion Tamarin at http://savetheliontamarin.org/. This organization supports the Associação Mico-Leão-Dourado, which is leads international efforts to save golden lion tamarins. They are currently working to reconnect forest fragments where tamarins live, educating local people, and monitoring and protecting the wild tamarins.