By Amy Berting and Nina Russo 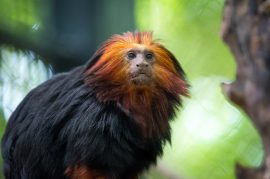 Don’t miss out on this golden opportunity to see the zoo’s newest primates, Marcos and Maya!  The twin golden-headed lion tamarins came to us from Brevard Zoo and brought the Florida sunshine with them!

These primates can be found in the tropical rainforests of Brazil.  A life in the tree tops produced the adaptation of claws instead of flat nails like humans have. These sharp nails at the end of their fingers are perfect for clinging to trees.

In the wild a golden-headed lion tamarin’s diet mainly consists of fruit, flowers, and insects.  They use their long, skinny fingers to extract sap and insects from trees and have also been known to opportunistically eat small birds and lizards. 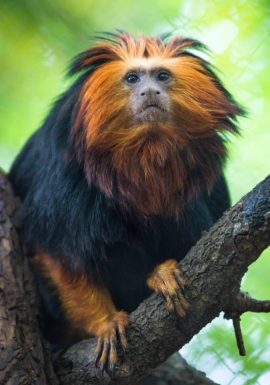 Like most primates, golden-headed lion tamarins are very social.  They live in groups consisting of 2-11 individuals. Twinning is typical for this species and our brother/sister pair is a perfect example.  Twins sure do sound like a lot of work! Fortunately, these mothers have lots of help.  Other members of the group take turns carrying and babysitting the babies.

What is all that screaming about?  When you visit the zoo you may hear high-pitched trills and whines coming from these small creatures.  These tamarins use a variety of different sounds to communicate things such as greetings, danger, and locating food.

Golden-headed lion tamarins also communicate using smells.  They have scent glands which they use to mark their territory and pathways to food sources.  Individuals can be identified by one another based on their scent. Can you sniff out your friends?