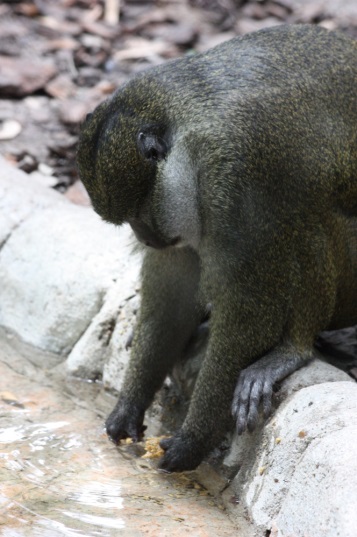 2016 is almost at an end, and so is the Year of the Monkey. We will be rounding out the year with one of my favorite species, Allen’s swamp monkey. Houston Zoo has two Allen’s swamp monkeys. Naku and Calvin. Let’s start with a question. What do ducks, otters, turtles, and swamp monkeys all have in common? The pictures might give you a hint. They love water and they have webbed feet! Swamp monkeys may not have fully webbed feet, like a duck, but they do have some webbing between their toes. They spend some time in the water and they can even swim! They will also dive into the water to escape from predators. The webbing in between their toes helps them swim.

This is just one example of how you can tell a lot about an animal, just by looking at it. You just have to know what to look for. So what else can we tell about a swamp monkey?

Some monkeys spend most of their time up in the trees, while others spend more time on the ground. What if I told you that you could make a pretty good guess about whether primates live in the trees or on the ground by looking at their arm to leg ratio? It can also tell you how they move around. Primates that live in the trees, but run on all fours, have legs that are slightly longer. DeBrazza’s guenons are an example of this. Orangutans and gibbons are examples of primates that live in the trees and get around by swinging from branch to branch. They have arms that are much longer than their legs. There are primates that have longer legs. These either walk around on two legs, like people, or they are tree-dwelling vertical clingers and leapers, like sifaka. Primates like swamp monkeys, that tend to live on the ground, usually have arms and legs that are about the same length. Swamp monkeys don’t spend all of their time on the ground, though, and when they do climb trees, they use their long tails to help them balance. 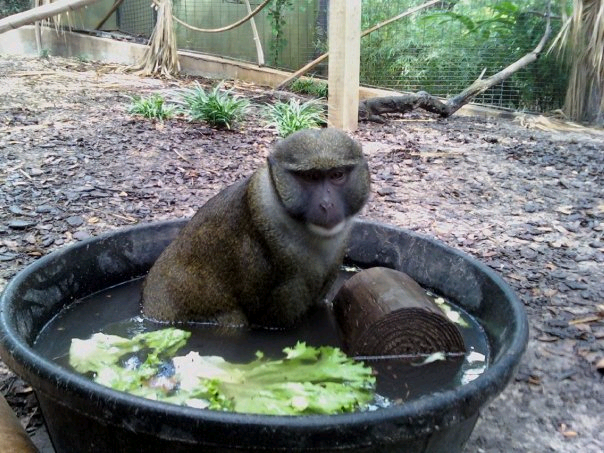 Swamp monkeys display what is called ‘sexual dimorphism’. This means that there are physical differences between males and females. In the case of swamp monkeys, the males are bigger than the females. The size difference suggests that males have to compete for females, or protect females from other males. Swamp monkeys live in groups consisting of multiple males and females. Primate species that tend to form monogamous pairs are more likely to have males and females that are similar in size, like gibbons or tamarins.

If you watch Calvin and Naku here at the zoo, you’ll see them both on the ground, and climbing around the exhibit. And especially when it’s hot, you might see them in the water, or just dipping their toes in. They don’t only use water to cool off, but you might also see Naku wash his food off before eating it.

Next time you’re at the zoo, walk around and take a really good look at all of the primates. What can you learn about their lifestyle, just by looking at them?