Summer has arrived! No, not the season; “Summer” is our newest pied tamarin that arrived at the Houston Zoo. The zoo’s original pair of pied tamarins were brothers. Ricardo and Mario got along well but it was time to separate and find mates. Mario moved to Chicago to meet his new mate while Ricardo patiently waited for Summer to arrive. Summer’s original home was the Philadelphia Zoo, but she was sent here with a breeding recommendation through the pied tamarin Species Survival Plan (or SSP for short). SSP’s are a breeding program that all AZA accredited zoos participate in to help preserve and save our endangered species. It is our hope that Summer and Ricardo will hit it off and become first time parents here at the Houston Zoo.

You may be wondering what a pied tamarin is. They are a small species of New World monkeys that live in the rainforests of Brazil. They have white and brown furry bodies with a characteristic bald head. Pied tamarins live in large social groups with multiple males and females. Pied tamarins almost always have twins during birthing season. These tiny mammals are able to manage raising twins due to the fact that they co-parent. This means that both mom and dad care for the offspring. The infants are passed to the mother for nursing, but spend a great deal of quality time with dad. 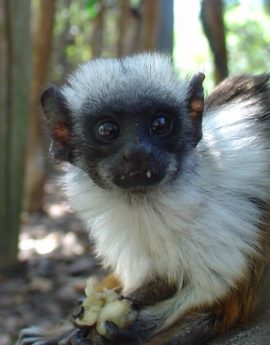 A large portion of a pied tamarin’s day is spent foraging for food. Their diet mainly consists of fruit and insects. When they aren’t looking for food they can be found grooming each other or communicating with one another through a variety of vocalizations or scent marking.

Pied tamarins are endangered as their rainforest habitat is being destroyed. Because of their small stature and cute features, they are also being captured and sold as pets. It is never a good idea to have a monkey as a pet!

Come show your support for pied tamarins by coming to the Houston Zoo and visiting our new couple in the Wortham World of Primates!