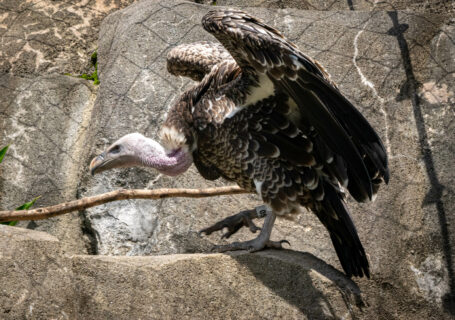 Six endangered vultures, whose population in the wild is steadily declining, have been brought to the Houston Zoo. The committee of vultures, a term used to reference a group of vultures, consists of two cape vultures, one Ruppell’s griffon vulture, and three hooded vultures. It’s the first time in the Zoo’s history to house these species of birds. All three are Old World vultures, the same as eagles and hawks. While they share this similarity, they also have distinguishing features:

Cape vultures’ wingspan can reach up to 8.5 feet and are among the largest Old World vultures. They can consume 10% of their body weight in a single feeding.

Rüppell’s griffon vultures are large with an eight-foot wingspan. They are said to be the highest-flying birds in the world.

Hooded vultures are smaller Old World vultures. Within this species the males tend to be smaller than females.

Guests to the Houston Zoo can see the committee of vultures in the former jaguar habitat next to the cougars.

The population of all three African species in the wild is quickly diminishing. Wild vultures are protected by antipoaching work the Zoo supports in Africa.  The Zoo provides training and support for antipoaching scouts hired from the local communities to find traps set for wildlife and apprehend poachers in areas where vultures live. The scouts patrol thousands of miles a year to protect wildlife.

Vultures tend to be a misunderstood species that are often viewed as foul because their diets are associated with death. On the contrary, vultures help keep the eco-system clean and balanced. Their preference for fresh carrion, carcasses vultures eat, allows them to dispose of or consume meat that would otherwise become a breeding ground for disease as it decays.

By visiting the Zoo, guests are contributing to the Zoo’s wildlife saving efforts, ensuring animals like the vultures, don’t go extinct. A portion of each Zoo admission and membership goes toward helping to protect vultures in the wild.