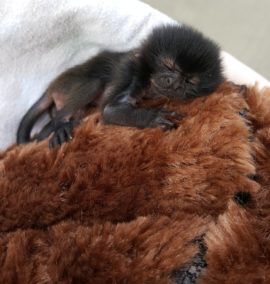 On the morning of February 28, 2017, keepers found a baby Goeldi’s monkey clinging to the bottom of the enclosure where the Goeldi’s are housed at night. It felt cold to the touch so zookeepers wrapped the infant in a blanket and rushed it to the vet clinic. At the clinic, he determined to be a male and weighed in at 44 grams. Typically, newborns weigh between 50 and 60 grams so it was assumed that he was born prematurely. Keepers attempted to introduce the infant back to his family group, but he was unable to cling to his mother, which is crucial for babies to to do. The decision was made that zookeepers would have to step in and hand raise the baby until he became more independent and the team would follow a hand-rearing protocol written by the Brookfield Zoo.

After a short time, the infant was given the name “Benjamin” and was moved to the clinic to get around-the-clock care and was housed in an incubator with his hairy mama (a stuffed animal with hair similar to his mother’s). His family was also moved to the clinic so that they could be near each other at all times. It was very important for Benjamin to know he was monkey and not get too attached to his human caretakers. Goeldi’s live in small family groups and the whole family helps raise the babies. Benjamin’s family consists of his mom, dad, and older brother. 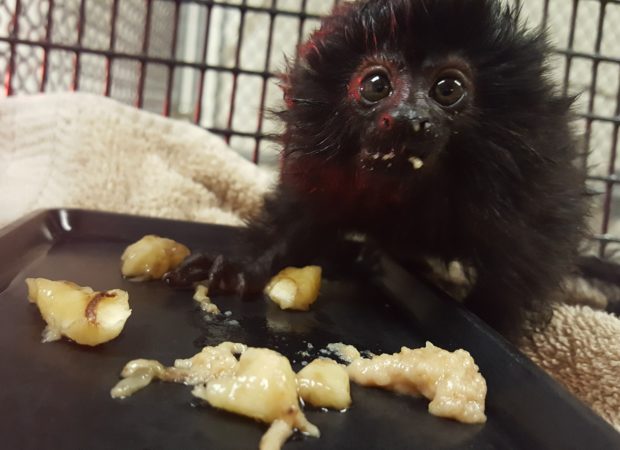 During the day, Benjamin’s incubator was kept in the same area as his family so that they could all see, hear, and smell each other. When he was taken out of the incubator for feedings, keepers sat right next to the family’s area so they could get up-close and see him. At night, he was moved to a different room so that the family’s sleep pattern wasn’t disrupted. He started off getting fed every 2 hours, just like a newborn human. Keepers had to feed him one drop of formula at a timeand massage his throat to encourage him to swallow. He received a special mixture of Enfamil, Ensure, and protein powder and was fed via syringe with a small nipple attached to the tip. He was encouraged to urinate and defecate with a warm, wet cotton ball before and after each feeding.

The primate team typically does not go in the enclosures with the primates, but it was necessary to do so with the Goeldi’s for the whole re-introduction process. We had to get the family used to us being in their space before we brought Benjamin in with us. We made our time in the enclosure with them a positive experience. We put treats and favored produce in their food bowls when we went in the enclosure. The family quickly became very comfortable with us, so we started bringing Benjamin in for feedings so that the family could get up close and touch him if they chose to do so.

Once the incubator temperature was lowered to the same temperature as the building, Benjamin was could spend the day out of the incubator in a “howdy box.” Benjamin and his hairy mama were placed in the howdy box inside the family’s enclosure during the day. This allowed him to be more immersed in the group. The family spent time sitting on top of the box while eating or grooming each other. They also liked to sit on the branches near the howdy box and vocalize back and forth with Benjamin. He was getting to learn their behaviors up close and they were getting used to him being a part of their daily lives.

Benjamin was slowly introduced to solid foods in addition to his formula and keepers slowly weaned him off his formula as he started to eat more solids. His favorite food was (and still is) banana. He also enjoys worms and grapes.

Over the next few weeks, Benjamin’s howdy box was left open so that the family could interact with him and Benjamin could explore the enclosure whenever he chose to do so. Keepers were hopeful that Benjamin would start riding on the back of one of his family members. At this point, he was still at the age where babies are carried around on the backs of their family members. His dad, Opie, spent a lot of time next to him and would present his back to Benjamin to encourage him to jump on, but Benjamin seemed nervous and unsure about what he was supposed to do.

As more time passed, Benjamin started becoming more comfortable with his family, especially Opie. Opie was very good about sharing his food with Benjamin and would bring pieces of food over to Benjamin and let him eat out of his hand. In the wild, this is one way youngsters learn which food is good to eat. Benjamin also started awkwardly riding on Opie for brief amounts of time and even began snuggling up side-by-side with his family members at night.

Right after Benjamin turned three months old, the whole family was brought back down to their habitat in Wortham World of Primates. Benjamin had become pretty independent and the whole family was getting along well. When they first entered the habitat, Benjamin hitched a ride on his mom’s back and after a few minutes of safely taking in all the new sights and sounds he hopped off and began exploring on his own. He put his running and jumping abilities to the test. While he miscalculated his jumps a few times, he did not let that discourage him.

Today Benjamin is six months old and now weighs over 300 grams and is about half the size of the adults. He enjoys spending time with his family and playing with enrichment. He is growing up so quickly and we are very proud of all the progress he and his family have made!