“Thank you for being a friend, Traveled down the road and back again, your heart is true you’re a pal and a confidant.”

If you can recall these words then you know where they come from-“The Golden Girls” T.V. show!!

The Golden Girls was a sitcom which revolved around four women sharing a house together.  The four ladies were Blanch, Rose, Dorothy and her mother Sophia.  We here at the Houston Zoo have our own “golden girls”–the patas monkeys who share some of the same characteristics.

Allow me to introduce you to our Golden Girls: 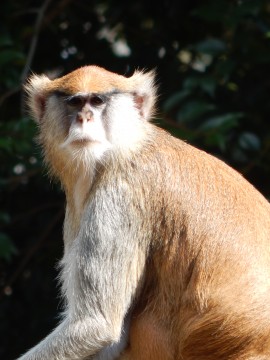 Ripley, our 11-year old, is much like the character Dorothy, watchful and smart.  She is the dominant member of our group.  She is independent, thinking ahead, but still is a daydreamer.  She is always watching over the group, especially her mother, Cassie. 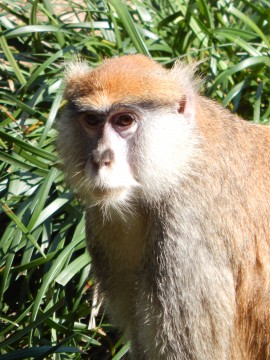 Cassie is the Sophia of the group. She was wild born in Senegal and estimated to be 30 years old.  Cassie is wise, socially smart, sometimes fills the role as the leader, and can be manipulative in social situations. 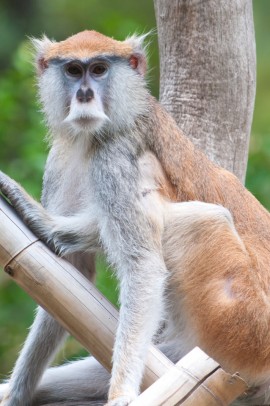 The character Blanch was the southern belle of the group and our southern belle is Troi, born at the Houston zoo 22 years ago. Troi has had two offspring currently living at other zoos.  She is the outsider of the group and can be selective of whom she calls a friend; but once a friend, she is very loyal.  Troi enjoys routine in her day. 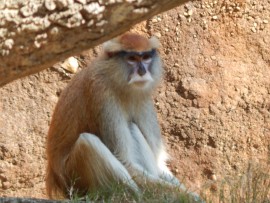 Lastly but not least is Alice.  Alice is our youngest at 7-years old.  Alice, like Rose, is considered to be sweet, sometimes insecure, simplistic, a follower and leans on the girls for guidance.

Found in equatorial Africa, patas monkeys have reddish-colored hair on their back and sides, grayish white hair on their underside, legs and feet, and dark colored hair above their eyes and on their nose with a white mustache.  Their coloring helps them blend into the savannah grasses where they live.  Patas monkeys have a narrow body and long, slender limbs and are the fastest out of all primates, reaching speeds up to 34 mph when running from danger.  They are omnivores, meaning their diet consists mainly of fruit, seeds, and insects, but they do enjoy grass, leaves, roots and bird eggs as well.  Although they live on the savannah and spend a good portion of their time foraging on the ground, patas usually sleep high in trees for safety.  Female patas monkeys live in permanent social groups.

Now that you know our Golden Girls, the next time you are visiting the Houston Zoo, I invite you to stop by the Patas exhibit in the Wortham World of Primates and check in on Cassie, Ripley, Troi and Alice and then go home and eat cheesecake.