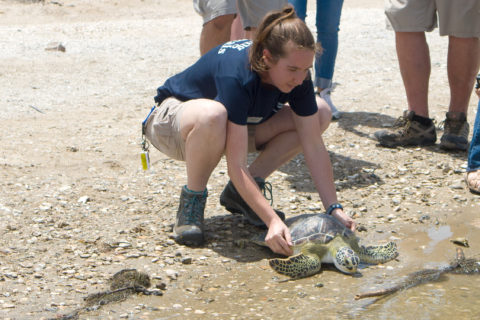 This sea turtle suffered injuries from a boat motor propeller and was brought to the Houston Zoo by the National Oceanic and Atmospheric Administration (NOAA) for long-term treatment by the zoo veterinary and aquarium teams. Diagnostic assistance was provided by Gulf Coast Veterinary Services Neurology team. After recovering from its ailments and receiving a clean bill of health, the green sea turtle was ready to be released. 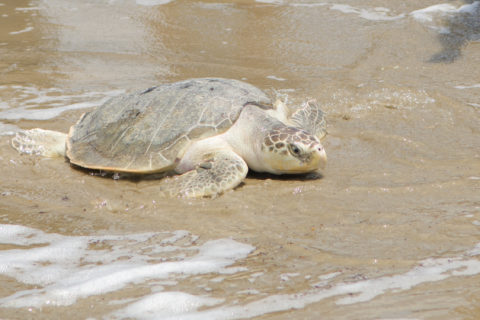 The other sea turtle, a Kemp’s ridley, was caught by a fisherman on Galveston Island earlier this month. The turtle was retrieved by NOAA staff and brought to senior zoo veterinarian, Dr. Joe Flanagan, where the turtle was anesthetized, and a fish hook was removed deep from its throat. After recovery from anesthesia, the turtle was treated with antibiotics and pain medication, and cared for by NOAA staff to assure it could eat and swallow normally. The turtle appeared to have no residual injuries so was released at the beach where it returned to the Gulf of Mexico.

People are urged to call 1-866-TURTLE-5 if they find, or accidentally catch, a sea turtle so that NOAA biologists can assess the turtle and provide care if needed.

There are five species of sea turtles inhabiting the Gulf of Mexico, all of which are threatened or endangered. They include the Kemp’s ridley, green, leatherback, Atlantic hawksbill, and loggerhead sea turtles.

Simply by choosing reusable shopping bags and water bottles, instead of single-use plastic items, and eliminating the use of plastic straws, people can help keep oceans and waterways clear of plastic pollution, maintaining a clean space for sea turtles to live.

Sea turtle populations are slowly recovering thanks to the collaborative effort of federal protections, scientists, non-profits, universities, grass roots organizations and many dedicated people. The Houston Zoo is proud to have treated hundreds of sea turtles and will continue to offer care to these incredible species that live in Texas’ local waters.