The Houston Zoo hosted our Brazilian Conservation Research Associate, Gabriel Massocato, in Houston for the month of March. The Zoo has funded Gabriel’s work to save giant armadillos and giant anteaters in the Brazil for the past 5 years.

He was awarded our Wildlife Warrior award last year and requested to put the awarded funds towards English and conservation/education courses and training. You may have enjoyed his blog describing his experience from last month, if not you can read it here. 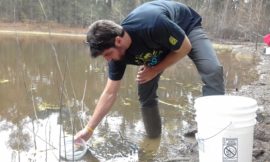 While here Gabriel experienced many different roles at the Houston Zoo. He participated in several Zoo events and was a part of 2 Facebook Live events, one of which was hosted on Animal Planet’s Facebook page. Gabriel also contributed to Texas endangered species field work by going on a Houston Toad tadpole release with members of our herpetology team and learned from our sea turtle conservation efforts and partners in Galveston. He learned about an adhesive they use to attached satellite tracking tags on sea turtle’s shells that may also work to attached satellite tracking tags on giant armadillo’s armor. 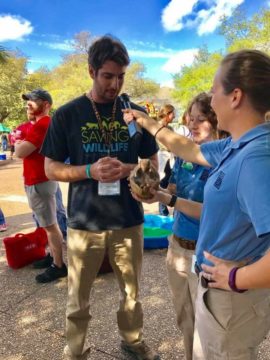 As Houston Zoo team members shared their wildlife saving roles and work with Gabriel, he shared his efforts to save giant armadillos in the wild. This week a documentary called Hotel Armadillo that features Gabriel and the Giant Armadillo Project’s work in Brazil’s Pantanal will air on PBS. The documentary, narrated by Sir David Attenborough, focuses on the important role that giant armadillos play in their environment and highlights the Outstanding conservation work Gabriel and his team are doing to save them from extinction.
Don’t miss Hotel Armadillo premiering Wednesday, April 19 at 7 p.m. (CT) on PBS.

Gabriel will be back to be a visiting instructor for the Houston Zoo’s college aged education program at the end of June. A portion of your admission and membership helps us fund Gabriel’s position to save giant armadillos and giant anteaters in the wild. Learn more and share in the successes of the Giant Armadillo Project by friending them on Facebook!