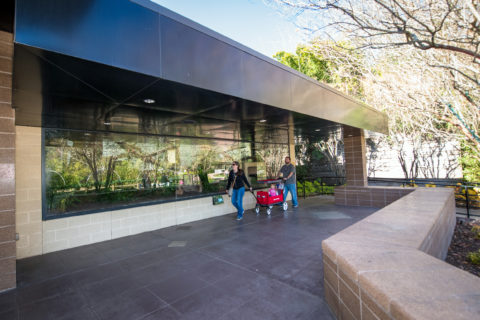 The two adorable red pandas we all love have lived at the Houston Zoo for several years, melting countless hearts along the way. Guests saw these adorable fluffy animals by Carruth Natural Encounters near the Zoo’s main entrance. As of last week, they can now be found in their new home “down the street” in the John P. McGovern Children’s Zoo, next to the Bug House!

Due to expansion and improvements underway at the Zoo, the Children’s Zoo was the perfect space for the red pandas to move. While they do have new neighbors, the new red panda habitat is just as wonderful as the previous one. Zoo staff have made the new space “red panda-friendly,” which includes all the comforts of their previous home along with several new aspects added for them to discover. The red pandas have enjoyed climbing the trees and props, as well as weaving through the plants on the ground. They are adjusting extremely well to their new home. In fact, zookeepers have observed the pandas taking in all the new sights, smells, and sounds of their environment, which they seem to enjoy. 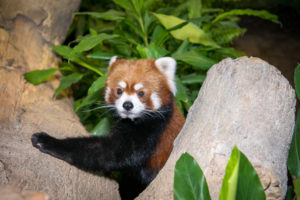 The Houston Zoo is home to two red pandas, Také (pronounced “Tah-kay”) and Li Ming. Také has been at the Houston Zoo since 2010; while Li Ming, moved to the Zoo in 2015. Though they look nearly identical, these two pandas have a few differences to tell them apart. The most noticeable difference between the two red pandas is their tails. Both red pandas have red and black coats with white markings, but Li Ming’s tail is much fuller and thicker than Také’s. If you are unable to see their tails, another way to tell them apart is by their undeniably adorable faces. Také has more distinct and sharp white “eyebrow” markings whereas Li Ming’s eyebrows are broader. Guests can see Také and Li Ming being more active in the early morning and early afternoon. They can be viewed during other parts of the day, though they might be lounging on their tree limbs or huddled in their den boxes. 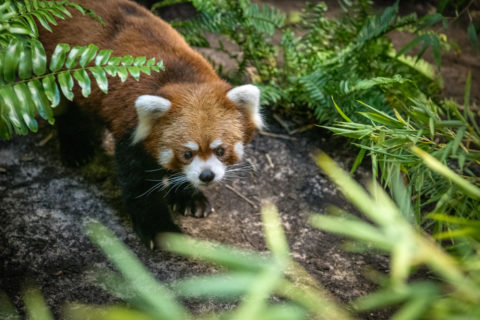 Don’t miss all the cuteness at the red panda’s new home now located in the Children’s Zoo, next to the Bug House. By visiting the Houston Zoo to see Také and Li Ming, you can help save red pandas in the wild.