The Houston Zoo is proud to have successfully raised a Mindanao bleeding-heart dove! The chick hatched on February 12, 2022.

When the egg was first laid, its parents were not incubating it properly, so the egg was placed under a pair of African collared doves to serve as foster parents. The collared doves were very attentive to their adopted chick when it first hatched, but after about 10 days, they had stopped sitting on the nest. Young birds require the warmth of their parents, because they can’t regulate their own body temperature when they first hatch.

So, when Houston was hit by a several-day cold snap at the end of February, the chick was in danger of freezing.

Bird keepers swiftly intervened, and the Mindanao bleeding-heart dove chick was brought inside for warmth. Our veterinary team responded quickly by giving the chick some fluids for hydration and successfully helped perk the bird up. Unfortunately, when a dependent chick is separated from its parents for more than a few days, it’s almost impossible to reintroduce it.

Since reintroduction was not possible, the keepers stepped in and served as the Mindanao bleeding-heart chick’s second set of foster parents. At the beginning, the chick had to eat five times per day every three hours. This meant keepers had to bring the chick home for evening feedings every night.

It was a lot of hard work and long hours, but luckily for its caretakers, birds grow incredibly fast. Just two months after hatching, the chick is just about full-grown and is eating entirely on its own. Soon, it will be moved to an outdoor habitat near its parents, where it will begin to socialize with other birds.

Mindanao bleeding-heart doves are native to the Philippines and are found primarily on the island of Mindanao. The main threat to their survival is destruction of their habitat. The status of this species is listed as vulnerable by the IUCN, with only 1,000 to 2,500 individuals remaining in the wild. 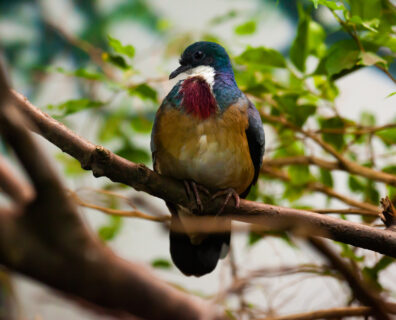 The Houston Zoo is working to save birds in the wild by serving Bird Friendly Certified coffee on grounds. The Zoo’s coffee provider, Katz, is a local business that sells sustainable, organic, shade grown coffee. Bird Friendly certification ensures that wild bird migration habitats are protected during the production of coffee. By purchasing Bird Friendly or rainforest-safe products, everyone can help protect the rainforest homes that wild animals depend on.

The Mindanao bleeding-heart doves are housed in the Zoo’s behind-the-scenes bird breeding facility.