Pepper is a 10-month-old Allen’s swamp monkey, daughter of first-time parents Naku and Calvin, and she is the life of the party in her habitat. At almost any given time of the day, you can find her running, jumping, climbing, swimming, or trying to play with the other animals in her habitat, whether they are monkeys, tortoises, or rabbits. 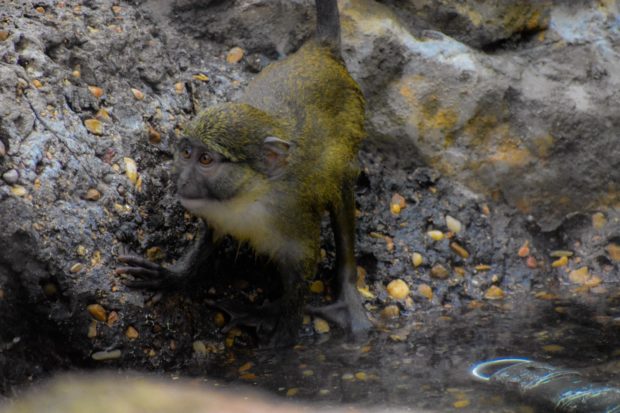 Like most young animals, she is extremely curious about everything around her. She will chase after birds and rabbits, stalk butterflies, catch bugs, and even try to pounce on bees! Bobbi the tortoise lives in the habitat during the summer, and she wasn’t safe from Pepper either. Pepper would follow Bobbi and try to grab her feet as she walked. And once Pepper became bold enough, she decided to hop onto Bobbi’s shell for a ride, albeit a very slow one. Calvin didn’t approve of this and would watch anxiously until Pepper got off. 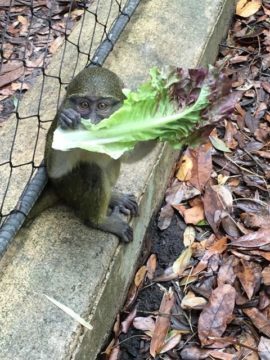 Pepper also watches her mom, Calvin, very carefully. A lot of young animals learn how to behave from their parents, and swamp monkeys are no exception. Swamp monkeys sometimes like to wash their food, or rub it on rocks before eating it. They will perform this behavior while playing with enrichment items or rocks or anything else they can find. Calvin did this once when Pepper was only a few months old. Before we knew it, Pepper was trying to copy her mom. She grabbed a stick and rolled it on the ground. Calvin is an expert forager. She will spend hours digging through the mulch and dirt in the habitat, looking for bugs or for forage items that we put in there, like bird seed or currants. Pepper has mastered this behavior and will dig through the dirt with enthusiasm. And when she finds a long earthworm, she will go running around with it.

Pepper is an adorable little monkey, but she is also an important ambassador for her species. Not only is Naku a first-time dad, he was also born in the wild. Fifteen years ago, he was rescued from a market in Africa when he was about two years old. Because he was born in the wild, he has some very important genes, which he has now passed on to Pepper.