On Nov. 12, the Houston Zoo’s female clouded leopard, Suksn, gave birth to two cubs. The cubs were born to seven-year-olds, Suksn and Tarak. The gender of the pair is not yet known. A few hours after their birth, the cubs were moved to the zoo’s veterinary clinic to begin receiving 24-hour care by the zoological team and began taking specially developed formula from a bottle within hours. The cubs will remain behind the scenes for several months while they grow and thrive. They will make their public debut this spring. 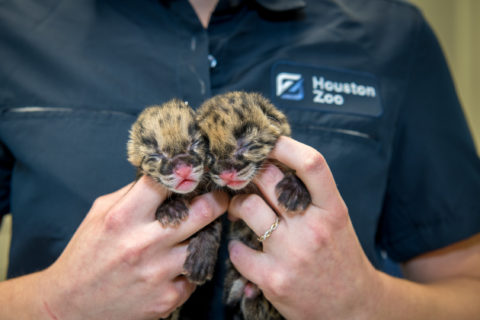 Clouded leopards are vulnerable to extinction because of deforestation and hunting.  Since this species is so rare, it is important to do everything possible to ensure the health and well-being of every clouded leopard born at a zoo which means sometimes it’s necessary to hand-raise newborn clouded leopards. Following best-practices from successful breeding programs at other Association of Zoos and Aquariums accredited organizations, and the Houston Zoo’s own successful hand-rearing of cubs Senja and Koshi in 2014, the Houston Zoo’s keepers and veterinary staff are extremely well-equipped to ensure these cubs receive the best care possible.

Every visit to the Houston Zoo helps save animals, like clouded leopards, in the wild.


About Clouded Leopards
The clouded leopard is unusual among the world’s cat species. They are the smallest of the large cats, have the largest canine teeth in proportion to their body size of any other cat species, and their coat is striking, yet so well blended for their habitat, that they are extremely difficult to see.

Named for its spotted coat, the clouded leopard and its habitat has remained a mystery. They live in an area ranging from the foothills of the Himalayas down the islands of Sumatra and Borneo in Southeast Asia. They are under pressure from habitat loss, poaching for their attractive coats and even the pet trade in several countries throughout Asia.

Clouded leopards excel at climbing; there are few cats in the world which can run up a tree, rotate their ankles to run down a tree headfirst or hang upside down from a tree limb.