Today we would like to celebrate 2 amazing residents of Wortham World of Primates: Remley & Jambi, our Babirusa. Babirusas are members of the pig (Suidae) family. Pigs in Wortham World of Primates? Babirusa are found in the same type of Indonesian forest as orangutans and both species are in danger of extinction largely due to habitat loss. At the Houston Zoo, the babirusa live across from the orangutan exhibit. 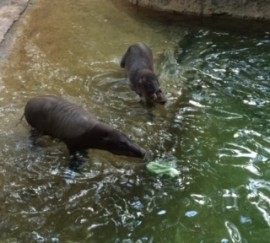 Babirusa are very cool! In fact, they spend a lot of time working to keep cool. They like to roll and wallow in mud which helps protect them from the sun and bugs. They also really like to swim as they are island dwellers.

The easiest way to tell them apart is by their teeth. Jambi is our male and has very obvious tusks. These are his canine teeth which will grow continuously throughout his life. Babirusa males wear down these tusks by rubbing them against trees and rocks. 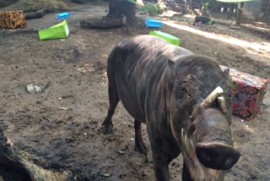 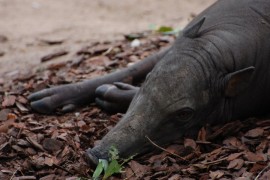 So why should care about babirusa? For starters, they are very intelligent. Here at the Houston Zoo, we train husbandry behaviors with our babirusa. This means that they learn behaviors that help us take better care of their health. And you thought you couldn’t teach an old pig new tricks!  To keep their minds sharp we provide them with daily enrichment such as putting their food in a puzzle feeder or forage pile, or placing scents around the exhibit for them to discover.

They are also very unique and attractive animals which brings wildlife enthusiasts to Indonesia for ecotourism. This helps support the local economy. In addition, the babirusa have been an important part of the culture of the region. They show up in art including masks and folklore. One legend says the babirusa use their tusks to hang off tree branches when they sleep at night. And they are just so cute!

What’s even cuter than an adult babirusa is a little babirusa piglet. Remley and Jambi have had one offspring Hadiah who has grown up and moved to start a family of her own. 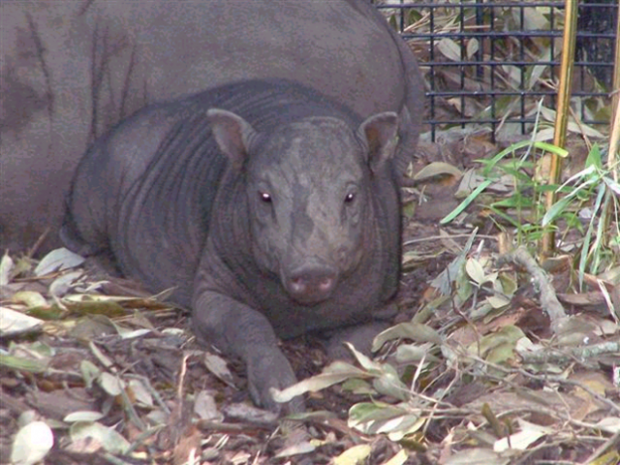 How can you save these adorable, genius babirusa?

Babirusa are endangered in the wild. One of the biggest problems they face is habitat loss. Palm oil plantations are a major cause of habitat loss in Indonesia. By paying attention to product labels and only using items that use sustainable palm oil, you can help protect babirusa and many other Indonesian species.