Featured this month is the De Brazza’s monkey (Cercopithecus neglectus), named after Italian-French explorer Pierre Savorgnan de Brazzas. It is a handsome species with a sleek gray coat, red brow and white beard. They are a type of guenon, which is a genus of colorful old world monkeys endemic to central Africa. The De Brazza’s monkey tends to live near water in swamps, bamboo and dry mountain forests. They will forage on the ground, but are mostly arboreal, which means they like to spend time up in trees. They eat primarily fruit and seeds but also eat leaves, flowers, buds, lizards and insects. Unlike most other guenons, they don’t live around other guenon species and they are very secretive with no alarm call. Instead, they freeze when danger approaches so as not to attract attention. They live in polygynous (multiple male and female) groups anywhere from 5-30 individuals. Some groups only consist of a male and female and their offspring, suggesting occurrences of monogamy in this species. It’s believed that females stay in their natal groups and the males leave to join other groups; however, this is currently being investigated by field researchers. 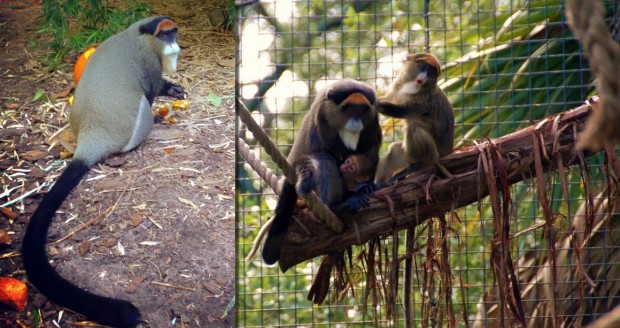 Here at the Houston Zoo we have a family group of De Brazza’s monkeys. Albert is the father whose job is to protect his family. Other than being almost twice as large (males average 7 kg while females average 4 kg), males and females can be hard to tell apart because they look exactly the same. However, males tend to have a more pronounced red brow and one can always look for the male parts, which are bright blue. If Albert is ever staring you down, he’s not admiring you or your outfit. He’s doing what’s called a threat display, but don’t be offended; I’m sure your zoo attire is just fine!  He’s simply doing his job and he does it very well. Albert can also be found strutting around with an arched tail and shaking tree branches which are both displays of dominance. Amelia is our adult female and Albert’s mate. They have had two offspring while living here: Ruby who just turned two at the end of December, and Flint who just turned one last November. The two youngsters can often be found wrestling and chasing each other around the exhibit. If at first not seen, they are likely heard rustling in the thick bamboo cover. Ruby, being the first born, had only her parents to play with. Albert was a doting father who Ruby may take after just a little too much, as she also will threat-stare and shake branches. Then there’s our newest and still adorable addition, Flint, who has not quite gotten his adult coloring yet. Young are born a bright golden hue and eventually the fur darkens with age. As younger siblings do, he likes to pull on his sister’s hair and tail, enticing her to a game of chase. Flint is very independent at this point; however, he still likes to be near his sister or mom, and still nurses occasionally. De Brazza’s monkeys are mature at 5-6 years of age. 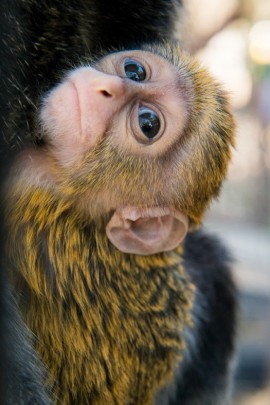 Although currently listed as least concern on the IUCN red list, their existence is threatened by the clearing of habitat for agriculture and the timber industry. They are also hunted for the bushmeat trade. (Albert and Amelia came to Houston 11 years ago after being rescued from the bushmeat trade in the Democratic Republic of Congo. It is not common practice for zoos to obtain animals from the wild except under dire circumstances such as this one.) They are one of the most widespread African primates that live in forests, but there are low densities throughout their range. Some De Brazza’s populations occur in multiple protected areas, safeguarding them – to some extent – from habitat loss. However, as more forests disappear this could fragment the populations, making it difficult for individuals to move between populations. Natural predators include the large African eagle, leopards, and chimpanzees.

Just by visiting the zoo you are helping to protect animals in the wild, as a portion of the proceeds from all ticket sales goes towards supporting our various conservation partners. One of those partners includes the Human-Wildlife Conflict Collaboration (HWCC) whose conflict transformation approach has led to reductions in poaching.

It is a privilege to have the animals we have at the zoo and for our guests to be able to experience them so intimately. Come and see this dynamic monkey species at the Wortham World of Primates.