Metamorphosis is a fun word, but what does it mean? The word comes from meta ,meaning change, and morphe, meaning form, so it literally means to change shape or transform. Though our topic is amphibians, I must point out that most insects do this as well and go through even crazier changes. 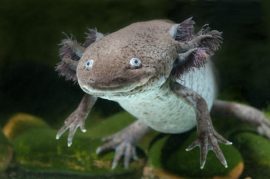 While some have what is called direct development where a miniature adult hatches from an egg, the majority (except for most caecilians) have a larval stage between egg and adult. The time from the egg hatching to the adult animal can take anywhere from 2 weeks (toads that breed in very temporary puddles basically) to up to 4 years for some spring salamanders. The time is dependent on species and/or environmental conditions. There are even some salamanders, like the axolotl, which never do it all the way, they stay forever in the water with gills, even becoming sexually mature and reproducing.

Because the transformation is more extreme for frogs and toads, the following is geared toward them. Depending on the species, eggs are laid in a variety of places, including in the water, attached or not to vegetation, on leaves overhanging water, and even in water filled tree holes. What hatches out of the eggs usually looks something like this: 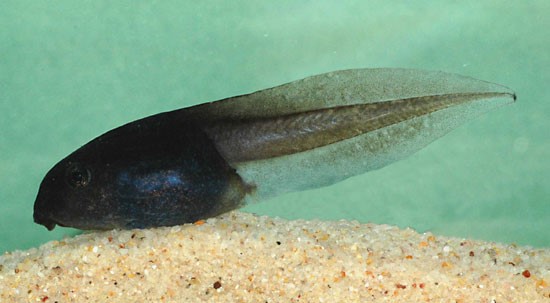 In this stage, they are fully aquatic and get oxygen via gills. They have sucker type mouths and most feed on vegetation by filter feeding or scraping algae off of rocks and things; however, some  are carnivorous!

Tadpoles go through tremendous change. Not only is the outside of their bodies drastically changing but the inside as well. They switch from gills in the water to lungs on land, skeletal changes occur (some things that were cartilage change to bone), eyes, skin, mouth parts, digestive system, all of this has to change.

Usually the back legs emerge first, starting as little nubs. 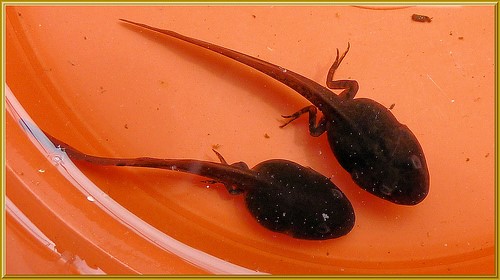 By contrast, the front legs appear first for salamanders and newts. The back legs grow and eventually the front legs pop out too. Often at this time, tadpoles will start coming partway out of the water. The time switching to lungs differs a lot between species and the type of habitat the tadpoles are from. At this point, they look something like this: 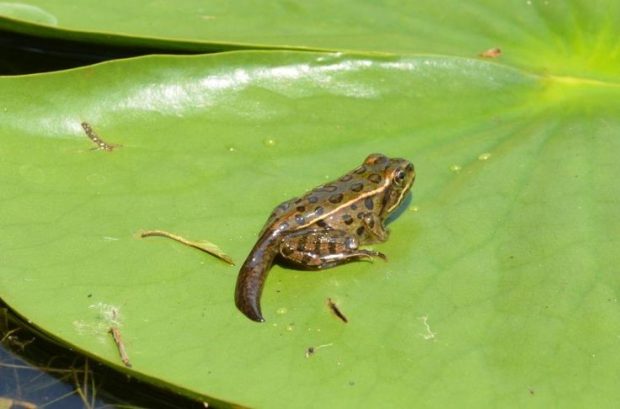 The tail is then absorbed (it would be a waste for it to just fall off) and the frog or toad is a bona fide, air breathing, land dwelling critter. There are frogs and toads that are semi or even wholly aquatic (they still breathe air) and there are some frogs that spend all of their time in trees, even breeding and hatching young without coming to the ground.

Here is a salamander larva.  Some of them have stunningly beautiful feathery gills. 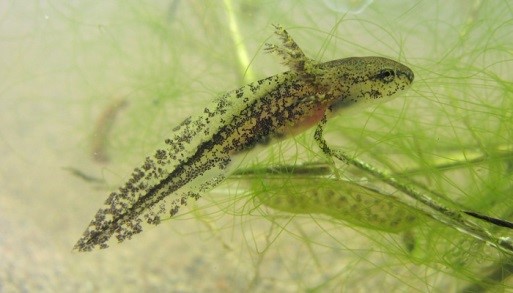 Amphibians are an incredibly diverse and fascinating group of animals. If you’d like to learn more, there are a lot of great resources out there. Check out: www.amphibanark.org , www.amphibiaweb.org , www.iucn.org, www.parcplace.org