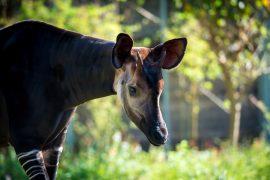 The Houston Zoo is home to one male and two female okapis named Kwame, Tulia and Sukari. Each of our okapis have very different personalities! Kwame came to us in 2002 and is the zoo’s breeding male and friendliest okapi. Kwame is easy to tell apart from the girls because he has ossicones. Ossicones are the two horn-like bumps on the heads of giraffes and male okapis! 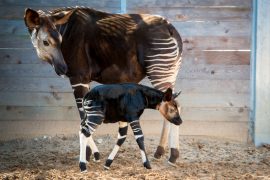 Next up is our largest okapi, weighing in at almost 700 pounds, Tulia! Female okapis tend to be larger than male okapis, with females ranging from about 530 to 790 pounds and males ranging from about 400 to 575 pounds. You may remember Tulia as the mom to Miraq, a calf born in 2014. Miraq has since moved to the Memphis Zoo’s Zambezi River exhibit. 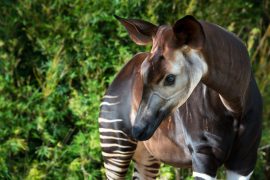 Last, but not least, our current breeding female, and newest okapi, is Sukari! Sukari arrived to the Houston Zoo in late 2014 from the San Antonio Zoo. Okapi gestation is about 14 to 15 months and produce a calf that ranges from 30 to 65 pounds at birth. Kwame and Sukari have been introduced to each other in hopes of having another adorable okapi calf!

Do you want to learn more about our okapis? Tuesday, October 18th, was the first annual World Okapi Day! For this very special event, we will be having an Okapi Meet the Keeper chat every day at 11:00 am; Monday, October 17th through Friday, October 21st. These chats will be in front of our okapi exhibit along our west hoof run exhibits. During the chat, the okapis will be given some fun enrichment! So make sure to stop by and meet our okapis!