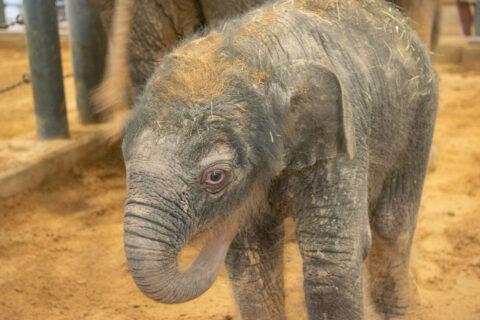 Just two months after baby elephant Winnie was born, there’s a new pachyderm in the herd! Sunday at 8:04 p.m., 37-year-old Asian elephant Tess gave birth to a 391-pound male, and the calf began to nurse within hours. The calf has been named Teddy by the team who have dedicated their lives to the care, well-being, and conservation of these incredible animals.

“Our animal team is thrilled that the birth has gone smoothly,” said Lisa Marie Avendano, vice president of animal operations at the Houston Zoo. “We look forward to continuing to watch Teddy and Tess bond, and introducing him to Houston.” 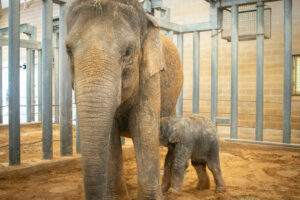 Tess gave birth in the McNair Asian Elephant Habitat cow barn under the supervision of her keepers and veterinary staff. She and the calf will undergo post-natal exams and may spend time bonding behind the scenes. During the bonding period, the elephant team is watching for the pair to share several key moments like communicating with mom and hitting weight goals.

Tess is also mother to Tucker (15), Tupelo (10) and Tilly (2), and grandmother to Winnie, born March 10. This calf raises the number of elephants in the Houston Zoo herd to 13—six males and seven females.

Over the next several years, the Zoo animal care team will watch the young elephant for signs of elephant endotheliotropic herpesvirus (EEHV). EEHV is the most devastating viral disease in elephants worldwide. It occurs in elephants in the wild as well as those in human care such as in sanctuaries and zoos. 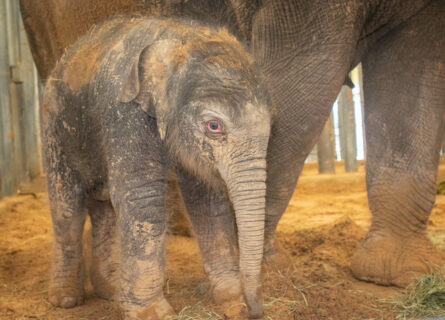 The Houston Zoo is an integral part of finding treatments and developing management strategies for the virus. The Zoo’s veterinarians and elephant care team established a research collaboration in 2009 with herpes virologist Dr. Paul Ling at Baylor College of Medicine’s Department of Virology and Microbiology, which recorded significant advancements in the study of EEHV, and toward a vaccine.

The Houston Zoo’s EEHV testing methods, treatment protocols, and experience serve as a global elephant care resource and have contributed to saving elephant calves around the world.

Just by visiting the Houston Zoo, guests help save baby elephants and their families in the wild.  A portion of each Zoo admission and membership goes to protecting wild elephants in Asia. The Zoo provides support, equipment, and training for local researchers to place satellite collars on wild elephants and track them in Asia.  The Zoo’s Malaysian conservation team is now watching over and protecting three groups of wild elephants with babies in Borneo. The data collected from these groups will inform future national protection plans for elephants.