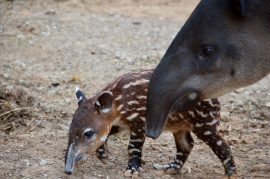 Baird’s tapirs are born with a colorful pattern of stripes and spots that will disappear as they grow older. The newborn tips the scales at 24.5 pounds, and when he’s full-grown zoo experts anticipate this bouncing baby boy could weigh more than 550 pounds! While he doesn’t have a name yet, the keepers who care for the tapir family will have the honor of naming the tiny tapir. 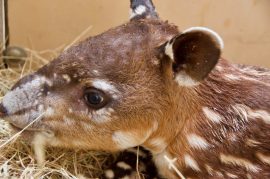 There are four species of tapir, three in South America and one in Malaysia. In South America where Baird’s tapirs are found, tapirs are the largest land mammal and live throughout the marsh and swamps from Mexico to Western Brazil and Ecuador.

The Baird’s tapirs at the Houston Zoo are ambassadors for their wild counterparts in South America. The Houston Zoo supports the protection of this endangered species in Central America as well as the Lowland tapir in Brazil through a partnership with the IUCN/SSC Tapir Specialist Group to support field research in Brazil’s Pantanal region.

Since the inception of this partnership, 57 tapirs have received tracking collars to help the group understand this elusive animals’ range. The tracking collars provide the best protection for adult and baby tapirs in the wild, including the 9 mothers and babies currently being tracked. Some of these babies that are being protected through the partnership in Brazil have already started losing their spots! 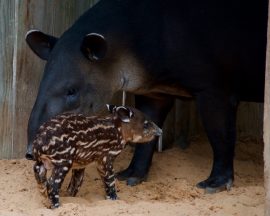