If you frequent the Zoo, you may have noticed our jaguar exhibit has been the hot spot for our new jaguar couple.

Here at the Houston Zoo, we have three jaguars.  Our oldest male, Kan Balam, has been at the zoo for 11 years and is 20 years old, significantly older than jaguars in the wild, and even considered old for a jaguar in a zoological setting. When his previous girlfriend passed away in 2015 at the age of 20, we noticed Kan Balam seemed to long for another friend. Jaguars are naturally solitary animals, but based on the personality of Kan Balam and his history of living with another jaguar, we wanted him to have a female friend.  We contacted the jaguar SSP, or Species Survival Plan, to see what they had in mind for Kan Balam. Kan Balam is a great-grandfather and his genetics are very well represented within the zoo community, so we wanted to pair him with a female for companionship rather than breeding. 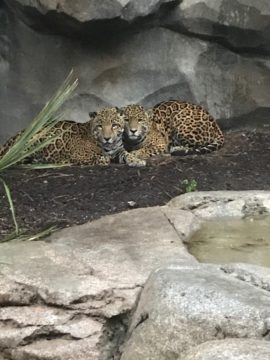 Species Survival Plans are very important for endangered and threatened animals in the zoological setting.  There is a group of people who are dedicated to each specific species, whether it is something big like a lion or giraffe, to the Louisiana pine snake.  The group keeps track of all the individuals in all AZA (Association of Zoos and Aquariums) accredited facilities in the US and some zoos around the world. They match animals up based on genetic variability, institutional needs, and personalities of animals. This way, zoos can create a sort of zoo “ark,” using science to make sure the animals in our care are as healthy as possible throughout their bloodlines.

The SSP informed us there was a lovely six year old lady jaguar named Maya from the Turtleback Zoo, who would be a good match for Kan Balam. Maya is young and genetically important to the population.  The SSP, or “eHarmony for jaguars”, wanted to pair Maya up with a male for breeding as well. So the SSP decided to not only send us Maya, but a young male named Tesoro from the Living Desert Zoo to be her mate in the future.

As you can imagine, this has led to quite the soap opera when it comes to love triangles. Kan Balam, the older experienced male, was first introduced to Maya. Both cats got along very well and enjoy each other’s company! The carnivore keepers thought it best to wait until Tesoro got a bit older to meet Maya since both he and Maya had only ever been with their siblings.  When he first came to Houston, Tesoro was only 1.5 years old.  Jaguars do not become sexually mature until age 2.5 – 3 years old.  So this March, right around Tesoro’s third birthday, we decided to introduce him to Maya.

We waited until Maya was in estrus, the period at which female jaguars are cycling and most receptive to males, and began to do introductions. Maya was very interested in the younger, very attractive male and introductions went…let’s just say very well. We believe the success we have had with introducing Maya to Tesoro is in part thanks to Kan Balam. Being older and experienced, he taught Maya proper jaguar courtship and how to interact with male jaguars.

Maya is now the lucky leading lady of both Kan Balam and Tesoro’s lives and will be sharing her habitat with one or the other on a daily rotation. 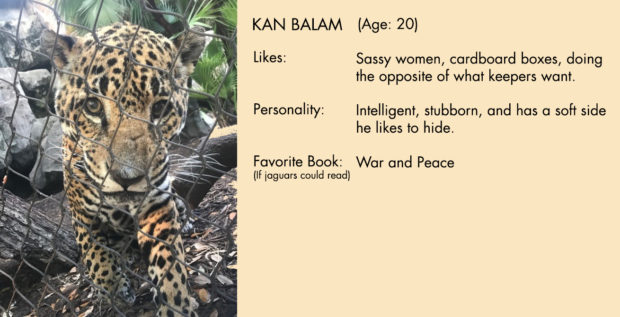 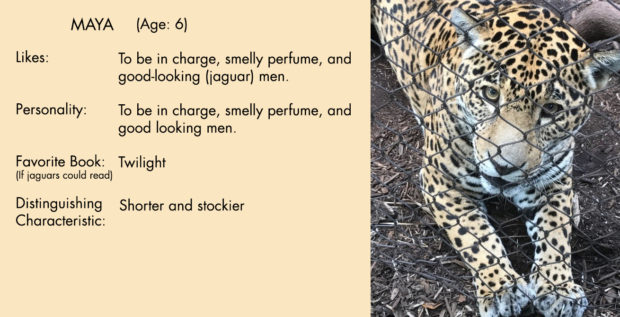 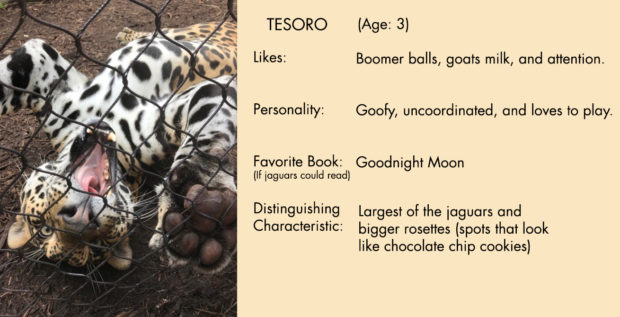