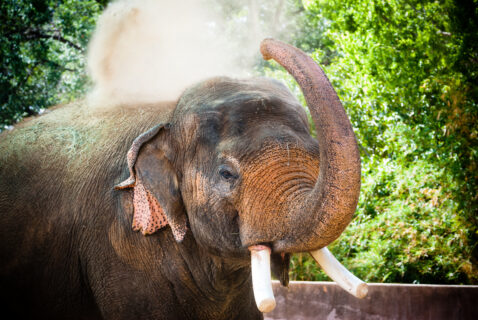 As the world’s largest land mammal, the elephant is one of Earth’s most treasured animals. Here at the Houston Zoo, we have the second oldest bull Asian elephant in the U.S., Thailand “Thai,” who arrived to the Houston Zoo in the 1980s with Methai, the matriarch of the Zoo’s elephant herd. Elephants in human care can live into their 50-60s. Thai is 57 and Methai is 53. Common signs of aging in older Asian elephants include arthritis in joints, teeth issues, and they lose the pigment in their skin and it turns a pink color—you’ll see more pink covering their ears and along their trunks. Find out how our elephant care team provides exceptional care to our aging elephants.

Elephants go through six sets of four brick-sized molars in their lifetime, and Thai is down to his last set. To make it easier on his teeth, we began offering Thai half of his daily hay diet in chipped form a few years ago. This hay is cut smaller and easier to digest because it requires less chewing. We also stopped offering him whole produce and now make sure any produce (he loves watermelon) he receives is cut into smaller pieces. Thailand also gets six pounds of oats and seven and half pounds of elephant grain daily to help maintain weight. While Methai’s diet has not changed much, she does receive six pounds of rolled oats daily to make sure she maintains her current weight, around 7,000 pounds.

Between the 13 elephants in our herd, they consume about 30 bales of Coastal hay a day! Thai is the father of seven of our Asian elephants: Baylor, Tupelo, Duncan, Joy, Tilly, Nelson, and Teddy. 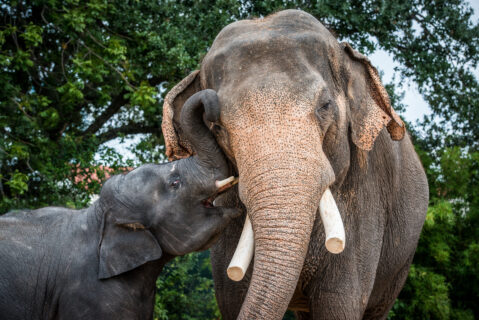 Our elephants are monitored closely every single day. It is important that we know as soon as possible if there is anything off. We do daily “elephant yoga” sessions with both Thai and Methai. This is where we ask them to raise and bend their legs repeatedly to warm up their joints. During these sessions, we can determine if they are moving like normal and also how well they respond to their keepers. We also do welfare assessments every other week for our geriatric elephants to closely monitor their health. We work very closely with our animal health team and will let them know at any time if an elephant is acting differently. We collect blood for regular monitoring each week and will collect a blood sample any time an any time there is a concern.

As part of their geriatric care, they both receive medications for arthritis. They are also provided with a soft sand mound to use as a bed, which Methai prefers. Thailand seems to prefer to lay down flat, but we will put fresh, soft sand on places that he lays so that he is more comfortable. The elephant care team has been doing a sleep study on Methai for the last five years. From this study, we have determined that she prefers to lay down to sleep. We make sure she has her own stall at least three times each week to sleep laying down (rather than standing up to sleep like a horse).

A question we get asked often is if their personalities change as they get older. Both of their personalities have stayed the same, even if their bodies move a little bit slower. As the herd matriarch, it’s Methai’s job to teach all of the elephants how to behave like good elephants and to make sure the herd is safe and comfortable. Even though she cannot move as well as she used to, you can still see her hustle across the yard to find out what’s going on if a young elephant calls out.

Elephant Supervisor Kristin shares, “When Nelson was really young, he laid down in the yard and ended up laying in a place that he couldn’t get the momentum to stand up. When he woke up from his nap, he started vocalizing because he couldn’t figure out how to stand up. His mom and older sister were also vocalizing and trying to help him stand, but also couldn’t figure out how to help. Methai walked right over, pushed her way past his mom, and using her trunk and front foot, gently lifted him right to his feet. It takes a level head to run a herd and Methai has always had that, age hasn’t affected it.”

When it is hot out, Thai loves when his keepers rinse him down with the water hose. In our bull yard, he will stand in front of the water cannon and get sprayed down any time it is above 95 degrees outside. Methai is a big fan of her rolled oats and loves browse. Any time she gets a large stick, she will eat all of the green and bark off of it and then can be seen using it as a back scratcher. Both of them are really vocal. Thailand will blow raspberries with his mouth when he wants more of whatever is being offered to him. Methai loves getting attention from the keepers that work closely with her.