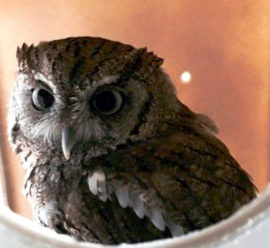 Ever wonder what that soft, melodious trill sound is in the middle of the night? That sound comes from a small owl that is often mistaken for a baby Great Horned Owl. It is the small, but mighty Eastern Screech Owl! These small owls live in tree crevices and nest boxes in suburbs and cities. They are active at night and blend in perfectly to their tree homes during the day. Their feathers look almost exactly like tree bark! 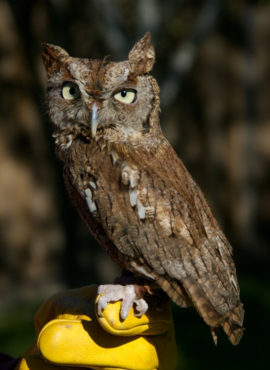 Here in the John P. McGovern Children’s Zoo, we have an Eastern Screech Owl that is one of our Ambassador Animals. Catori is trained to sit on a glove and go to school programs, keeper chats and special events! He is a favorite of guests and keepers alike! These owls love to live either in tree crevices or in nest boxes.  By putting one of these screech owl nest boxes in your backyard, you are helping this little guy have a safe place from the elements and would be predators. 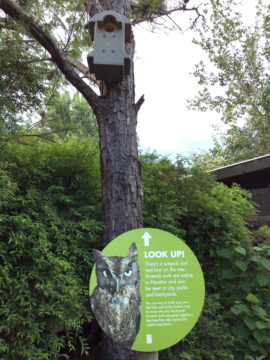 Another advantage to having Screech Owls around is they hunt insects, rodents, lizards and a variety of other small prey items making them a perfect natural insect and rodent control solution for homeowners. Nest boxes also help Screech Owls as more and more of their natural homes, trees, are being cut down every day.

You can either buy or build your own nest box for the Eastern Screech Owl.  By doing a simple internet search, you will find countless nest box plans and screech owl houses for sale.

So, on your next visit to the Houston Zoo, be sure to stop on by the Children’s Zoo and check out our own Screech Owl nest box! You might even get to see an Eastern Screech Owl looking back at you!