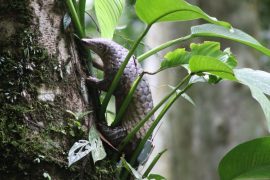 Last week, a local villager from Kg Menggaris, Malaysia, found an adult female pangolin crossing a road near a palm oil plantation and immediately brought it home and told his son, who later shared it on his Facebook. Researchers at Houston Zoo partners Danau Girang Field Centre (DGFC) contacted the family and rescued the Sunda pangolin which then was fitted with a satellite unit and released near the center. This is the first time a Sunda pangolin has been tagged with a satellite tracking device.

“Pangolins are the most trafficked mammal in the world, and are mainly threatened by poaching for international trade involving live animals, meat and scales, while another threat they face is habitat loss and fragmentation, although the severity of this threat requires further research in Sabah,” said Dr Benoit Goossens, director of Danau Girang Field Centre. “The Sunda pangolin is the only species found in Sabah,” added Goossens. Several government and private entities are working to revise the status of the Sunda pangolan to increst it to become a totally protected species. 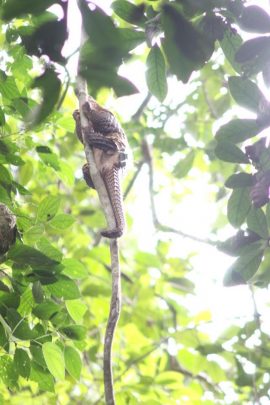 The successful rescue and release operation was led by Sabahan Elisa Panjang, a Cardiff University PhD student currently working with DGFC and Dr Laura Benedict, a Sarawakian wildlife veterinarian from Sabah Wildlife Department’s Wildlife Rescue Unit. The full procedure took about an hour and involved a medical check-up, biological sample collection and the attachment of the Global Positioning System (GPS) unit. The project is a long-term collaboration between DGFC and SWD and is financially supported by Houston Zoo and Ocean Park Conservation Foundation Hong Kong.

“Pangolins are scaly mammals and this character makes it unique. The species is very difficult to study due to its elusive behavior and is now very rare too; in fact it is one of the most understudied mammals, and no detailed research has been carried out on the species,” said Elisa Panjang, the lead researcher from DGFC. “We want to understand how the pangolin responds to its environment, particularly in degraded and fragmented forest such as the Kinabatangan,” added Elisa. “The pangolin which has been named Asa, meaning ‘don’t give up’ in Malay, weighed 7.72 kilograms, and was attached with a GPS unit weighing 80 grams on its scales, situated at its hind leg near to its tail to minimize interference with its movement. The pangolin was kept at the center for a day to monitor its health before being released, and it has been successfully tracked for already a week,” concluded Elisa. 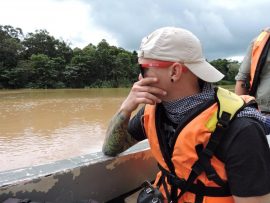 Houston Zoo herpetology senior keeper Chris Bednarski was visiting the Danau Girang Field Centre while on vacation in Borneo and was able to participate in the release. Chris has been a conservation advocate for turtles for his entire career, and has been instrumental in breeding several endangered species at the Houston Zoo. Chris says that being able to participate in the reintroduction of an animal like the pangolin was an incredible career highlight.

All photos courtesy of Chris Bednarski.