This blog was written by Steve Howard, a member of the Zoo’s Bird Department. Steve Howard received a Staff Conservation Fund grant from his coworkers at the Houston Zoo to carry out a wildlife-saving project for birds in the Mariana Islands (a chain of islands in the western North Pacific Ocean). We will be posting a series of blogs as Steve documents his work overseas.

Things have been going fast – we’ve already trapped 40 of the 54 Tinian Monarchs that are to be translocated to Guguan. Along with the birds moved last year, this should assure that there is a “safe harbor” population of birds from Tinian (the Tinian Monarch is found nowhere else in the world). So, should disaster strike in the form of the Brown Tree Snake invading the island, there will be birds safe in another place. The picture below is of a Rufous Fantail just extracted from the net. They are beautiful and curious birds, and will often fly to a nearby branch to investigate what you’re doing.

There are other species of birds here that are not being moved at this time. These are birds that live on multiple islands and are not endangered. These “non-target species” are released when caught. This is me holding a collared kingfisher that I had removed from the net.

Today there are more people coming in to work on the project. There is a start-up crew, which I’m on, and a close-down crew, the ones coming in tomorrow, and they overlap by about a week. Since we’re doing so well with the trapping, we’ll take a day off tomorrow and spend some time meeting and getting to know each other. Then we’ll head out to the field again and continue trapping. We have most of the Tinian Monarchs, now it’s time to start collecting the Bridled White-eyes. These birds are beautiful, and so tiny! They weigh in at around 7 grams.

So that means the bird room, where the birds are held and maintained until release, is about to get busy! I’ll be working there now, so I’ll write more about that next.

One last thing for today – I took a walk down to the beach this afternoon and wanted to share this picture. It really is a beautiful place! 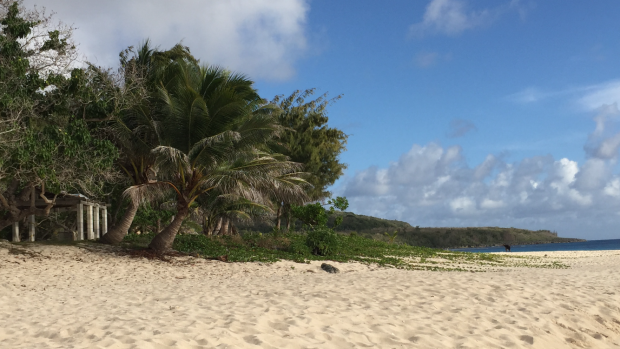 To find out more about our Houston Zoo staff saving wildlife, click here.