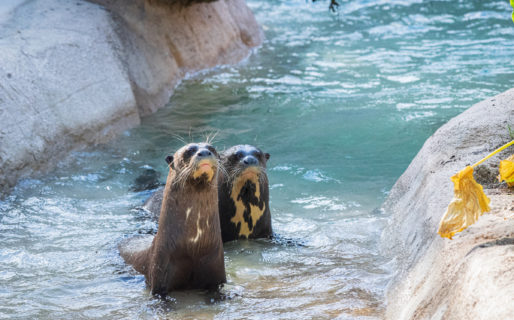 On Tuesday night, 12-year-old giant river otter Dru was found to be acutely and severely ill by the keepers who care for her.  The veterinarian team performed an emergency after-hours exam on her and found that she was in renal failure.  On radiographs and ultrasound, both of her kidneys appeared very abnormal.  Unfortunately, with her rapid decline and two unhealthy kidneys, there were no reasonable treatment options, and the team made the difficult decision to humanely euthanize her.  A complete post-mortem confirmed that both kidneys had significant disease.

While Dru only lived at the Houston Zoo for a year, she was well-loved by the animal care team and will be remembered for her joy of eating standing up, rolling around in the sand and lounging in the sunshine.  The Zoo will work with the Association of Zoos and Aquariums Species Survival Plan to determine if her partner Max is a good candidate to be matched with another female otter.