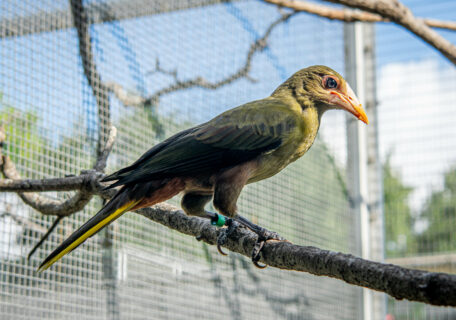 The Houston Zoo has gathered one of the largest flocks of green oropendolas that has ever been assembled in North America, with 15 adult birds. As a result, three chicks have hatched over the past month. This is the first time the Houston Zoo has ever raised green oropendolas in its nearly 100-year history. The nesting habits of this bird are one of the most spectacular in the bird world in the way the nest is constructed. It resembles a woven basket up to five feet long that can hang up to 100 feet above the ground. This prevents predators from getting to it but also makes it difficult for keepers to spot. During a routine check, keepers found the hens had passed away and discovered chicks and eggs inside the nests.

Guests can see adult green oropendolas inside the Savanna Aviary, part of the Zoo’s newest exhibit, South America’s Pantanal. The chicks will remain under the care of their keepers behind the scenes until they are large enough to join the flock.

By visiting the Houston Zoo, guests are contributing to wildlife-saving efforts ensuring that animals, like the green oropendolas, are protected. A portion of each Zoo admission and membership goes toward supporting work in Brazil that is conserving hundreds of square miles from fire, protecting wild oropendola’s and their habitat.