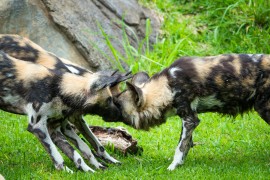 For the Houston Zoo’s pair of elderly male African painted dogs, Tuesday, April 26 brought a whole lot of excitement as they were introduced to their new pack mates, three female dogs that recently moved to Houston from a zoo in the UK. The two- and three-year-old females spent the past 30 days in required quarantine and once they were given the all-clear from the staff veterinarians, moved to their new home where they will reside with Mikita (10) and Blaze (14). The new names of the females will be chosen by the keepers who care for them and will be announced soon. 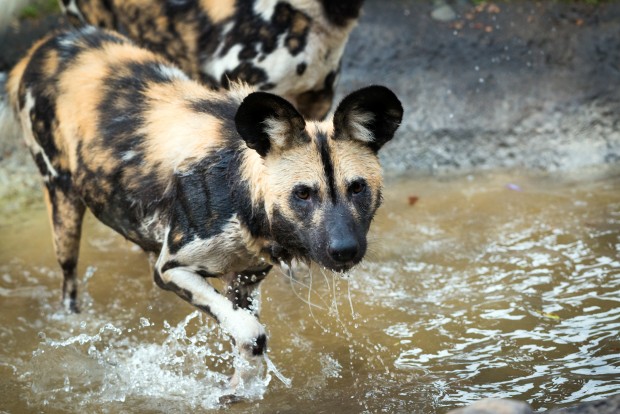 African painted dogs are also referred to as African wild dogs or African hunting dogs. As one of the most endangered species in Africa, with less than 5,000 left in the wild, the Houston Zoo works with conservationists at Painted Dog Conservation in Zimbabwe to help save this species from extinction. Some of the ways the Houston Zoo helps save these animals in the wild is by providing vital financial support and training to the conservation programs which enables community members to conduct anti-poaching education, rehabilitate injured dogs, reintroduce dogs into the wild, and monitor wild packs. The zoo’s facilities team has also assisted with creating special tracking collars for researchers to use on wild painted dogs. These collars collect valuable data about the painted dogs’ movement patterns, as well as help protect them from deadly snare wire traps set out by poachers.