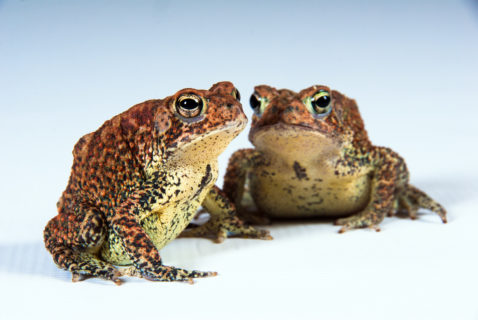 Each year, February marks the start of the Houston Toad breeding season. If you were to walk by the toad building during the evening you would hear the very loud chorus of trills the males make while trying to attract a female. When many males call together the sound is amplified and can be heard for long distances. Luckily for the males that live here at the Zoo, the females are close by. This isn’t always the case for male Houston toads in the wild. This Texas native is endangered due mainly to habitat loss and is found in only 9 counties. It hasn’t been seen in Houston since the 1970s. 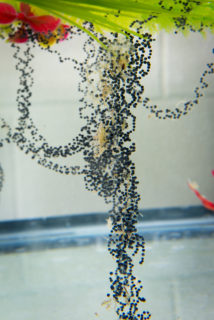 Since 2007 the Houston Zoo has been working hard to make sure the Houston toad doesn’t disappear from Texas forever. About 600 toads live permanently at the Houston Zoo and these toads have a very important job; make more Houston Toads. Each week, starting in February and continuing into May toads are placed in breeding pairs and hopefully, lay a strand of eggs over the next two nights. These egg strands contain 4,000 to 10,000 eggs! Once the eggs are laid, each strand is carefully moved into individual transport buckets and whisked away to ponds in Bastrop county. The eggs are placed in protective baskets within the pond but once the tadpoles hatch it is up to them to fend for themselves just like the eggs laid in the wild.

Over the last few years, there have been some positive signs of recovery for the toads in the wild. For the first time in many years, egg strands are being found laid in the wild. Wild male toads choruses are being recorded and adult toads have been spotted in the wild as well! In 2019, the Houston Zoo released 985,000 eggs into the wild in Bastrop County and we eagerly anticipate releasing just as many this year as well.  To date, Houston Zoo has released over 4.5 million eggs back into the wild!