“Do your lions go to school too?” was the question an elementary school child asked after the lion keeper mentioned that our lion sisters are eight years-old, just like them.

“Actually, they do go to school in the sense that the lions have to learn things like you do at school.” the keeper said. 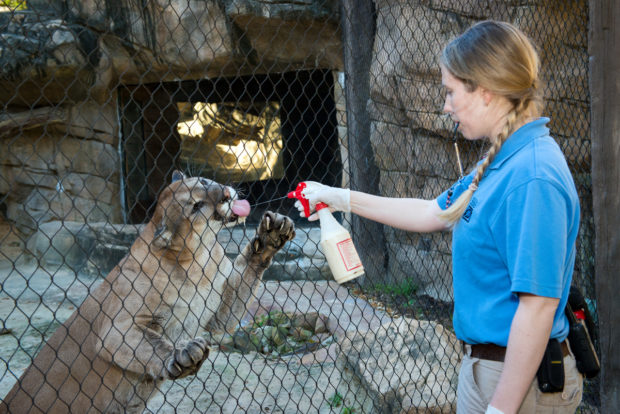 The most important part of a zookeeper’s day is animal care. These are things such as feeding and cleaning but also equally important is making sure the animals are mentally stimulated. One way that zookeepers do this is through training. Believe it or not, you can train a cat! The carnivore keepers work on training sessions with all of the carnivores daily, and often multiple times per day. Many times when people hear the word “training” they think of dogs doing tricks. Instead of tricks, we focus on behaviors related to animal care in our training sessions.

The carnivore department uses positive reinforcement based training. For anyone who has a pet cat at home, you are well aware that if your cat doesn’t want to do something you ask, they won’t, and there isn’t much you can do about it. The same can usually be said for the large and small cats at the zoo. During training, keepers are safely outside of the habitats and will sound a whistle whenever the cat completes an action asked by the keeper. Think of it like a game where the whistle means “correct” but no whistle means “incorrect.” During training, if the cats hear the whistle, they know that a tasty treat is on the way. And if an animal decides they don’t want to train that day, they still receive their daily diet. It’s important to note that we don’t force our animals to do anything, and their participation is totally optional. The treats received during training are yummy extras to their meals, making the sessions even more rewarding for the cats.

Each carnivore has a favorite treat that the trainers will save for a training session. The lions are partial to goat’s milk, while the jaguars really like whole prey items, such as mice and chicks (previously frozen then thawed). Unsurprisingly, our bears’ favorite training treats are honey and fruit. Our cougars think all food is delicious but capelin (fish) is one of their favorites. All of these special food items mean that the animals in the carnivore department look forward to training time.

Training not only stimulates the carnivores’ minds, it also allows the animals to participate in their own medical care. Many of the trained behaviors are husbandry behaviors. Having a cheetah show you their paws, open their mouth, receive a vaccine injection, or allow blood to be drawn voluntarily from their tail allows the keeper to keep a close eye on the cat’s health and helps to strengthen the relationship between the animal and the veterinarians. During these training sessions, the animals could decide to leave at any time, so it is the goal of the trainer to make sure the sessions stay positive so the animal wants to participate.

A few of the carnivores could be considered to be on the Advanced Placement route, since they learned the standard list of behaviors so quickly. Kan Balam, our elderly male jaguar, knows over 20 different behaviors and his trainers are constantly working to teach him more. Some of his fun behaviors are to climb, dig, and hop onto a table. Our female cougar, Haley, will leap around her habitat, showing off her acrobatic abilities. Hansel, the male fossa, proves that even the little carnivores love training. When cued, he will climb to the top of his habitat at such speeds it would make a lemur squirm. Now that you know about the training we do in the carnivore department, come and see our carnivores put their training to use at our keeper chats!