It’s nine o’clock on a Tuesday in December.

Children run along the sidewalk playing with light-up toys, their parents strolling along behind them sipping hot chocolates that may or may not have a “pick-me-up” inside.

A chorus of cheers and applause suddenly erupts from a crowd of people 50-feet away. Strangers join each other in celebrating someone else’s new start: she said “yes.”

The opening chimes of Mariah Carey’s “All I Want for Christmas is You” begin to play over a loudspeaker, a tiger seemingly roaring along while a gaggle of teenagers film a TikTok dance in front of an archway of lights. All of this can only mean one thing:

This year is the 10-year anniversary of Zoo Lights at the Houston Zoo (that’s right, it’s our aluminum anniversary) and this is very much the busy season for the night team. The dark and quiet zoo that my boss and I are used to having all to ourselves the other ten months of the year (Zoo Lights started at the beginning of November) is now transformed into a bright, festive, and beautiful celebration. 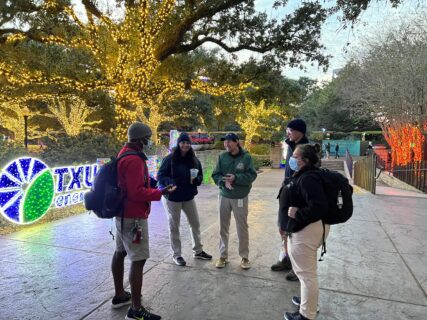 I have to be honest with you, it takes a lot of time, planning, and preparation leading up to this event to make sure the event is successful and the animals’ wellbeing is a top priority.

The Houston Zoo recognizes that this is an adjustment for our animal residents too, and we are working hard to make sure that our animals’ welfare is not being negatively affected by all the fun of the lights and the music… or the 25, simultaneous, amateur, karaoke versions of everyone’s most beloved – or hated – seasonal song.

And just how are we accomplishing this? I’m so glad you asked!

The planning for animal welfare begins well before Zoo Lights opens to the public. For starters, you’ll find that the Zoo Lights pathway generally avoids the animal areas of the Zoo, and that the light displays are pointed away from animal habitats. You may also notice that for some of the animals that do live next to the pathway, like our lions and tiger, we have curtains drawn down on their viewing windows. This is to help block out the light displays that cannot be directed away from these habitats and reduce the potential stress of having hundreds of people walk by their windows at night. After all, you probably wouldn’t appreciate having someone stare at you through your bedroom window at night! 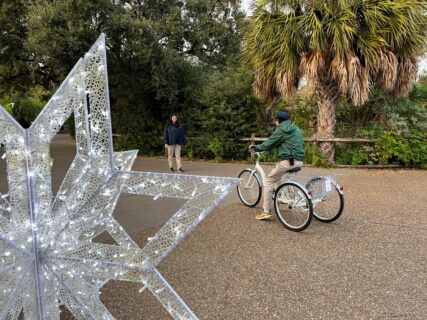 Speaking of bedrooms, it is important to remember that Zoo Lights is happening when most of our animals are trying to rest from their day. No one (human or animal) enjoys having a light shone in their face while they are trying to catch some z’s. So, for those exhibits along the Zoo Lights path where curtains aren’t an option (such as at giraffe and rhino), you will see some signs placed asking you to refrain from using flash photography in those areas. Again, this is for the best welfare of our animals. I think you’ll be pleasantly surprised at the quality of low-light photos that your cell phone can produce!

[And for any boundary-pushing literalists who might be reading this blog, I would like to add here that “flashes” and “flash photography” is also meant to include flashlights, phone lights, laser pointers, candles, lighters, matches and any other illumination devices. Please don’t shine any lights in any of our animals’ homes at night – or during the day! Our animals thank you for your cooperation.]

In addition to making sure the lights don’t shine into habitats, we also make sure that the music from our speakers isn’t too loud. I’m sure you’ve all had to experience that one noisy neighbor (or passing car) who plays their questionable musical choices way too loud, way too late at night. We don’t want to be like them. We want to be kind to our residents; so again, before we open to the public, we check all the speakers in the zoo. We use our decibel meters and watch animal behavior to make sure the sounds are not too loud.

However, our sound monitoring doesn’t stop after just one test! Rather, it continues every night that Zoo Lights is running to ensure that we are always staying within safe exposure ranges for our animals. The next time you visit Zoo Lights, see if you can find one or two keepers (my daytime keeper friends getting some overtime!) standing off to the side with an iPad and a machine that looks like a funny microphone (this is our sound meter). These keepers are taking the nightly sound readings and are making sure our animals are staying safe.

Having the extra keepers here at night is one of the nicest parts of Zoo Lights for me. Not only does it give me a chance to spend some time with my day-walking coworkers, but it also ensures that we have plenty of eyes available to make sure that guests are behaving appropriately and that animals are behaving calmly. In fact, having the additional keepers on grounds allows the Night Team time to partake in detailed animal behavior studies during Zoo Lights. Generally, these studies require us to make several instantaneous behavior observations of specific animals at random times throughout the night. For each observation we note where the animal is located in its habitat as well as what activity it is doing at the exact moment at which we saw it (e.g. is it drinking, walking, eating, sleeping, etc.). By making several of these observations a night for every single night of Zoo Lights, we can get a good idea as to whether Zoo Lights might be impacting our resident animals’ behavior and make the changes needed to address any negative findings. In fact, it is because of these previous behavior studies that the Zoo Lights pathway no longer goes past the clouded leopards (they weren’t fans) but does still go past the giraffes (they just don’t seem to mind… so long as people aren’t attempting to take flash photos of them).

So, the next time you’re strolling around Zoo Lights and attempting to sing the word “you” at the incredibly difficult E5 pitch (like Mariah does), just remember that we at the Houston Zoo are working hard to make sure that our animals are still having their own (slightly more) silent nights. Because here at the Houston Zoo we aren’t just working to save animals in the wild from 9 to 5. We’re doing it all night, too.