My name is Kali Tindell and I’m currently a junior in high school. This past summer I had the opportunity to visit Namibia, an ecologically and culturally diverse country on the south-western coast of Africa, and study both wildlife conservation and photography with National Geographic Student Expeditions. I was introduced to the many ways nonprofits conserve Namibia’s habitats and felt inspired to share my experience. I hope these blogs encourage you to learn about how conservation can be fun and to take a closer look at what makes your environment unique. 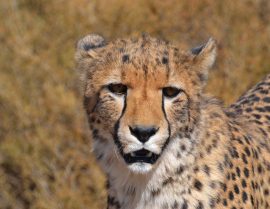 The light on the camera trap blinked as it snapped a series of crisp photos of our group. One person held the information sheet with the camera’s ID number, the location, and the time while the rest of us huddled close and smiled. We wouldn’t be able to see the photos ‘till the end of the week when we would return and retrieve the trap. Hopefully, in that time, the camera would capture some other animals as well.

Before taking the photo, we had discussed where the best location for the trap would be. We aimed to capture photos of wildlife passing by a riverbed while also setting up the camera at an angle that would detect both small animals, like mongoose, and larger ones, such as kudu. Furthermore, the trap had to be well protected from curious baboons (they are known to remove camera traps from trees and play with them). 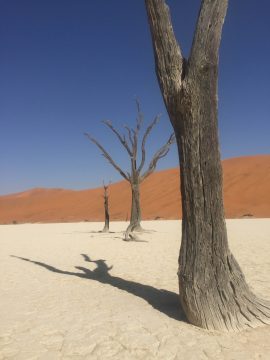 We decided to wrap the camera around a bent branch that snaked out into the trail. However, the branch offered no natural protection from animals so we gathered thorny branches and wove them around the tree. Luckily, when we returned to retrieve the camera a few days later, it was untouched.

Sorting through the pictures and identifying the animals photographed was not an easy task. However, when we saw certain species over and over again, we began to identify them with more ease. I’ll never forget how excited and surprised we were when a male warthog appeared in one of the photos or when a small duiker wandered into the frame.

Setting up our own camera trap gave us a taste of a tool many researchers use regularly. Camera trap photos can be used as valuable data for analyzing the population density of animal species, identifying animals in the area, and monitoring animal behavior. Researchers can leave traps in the field for months before returning to view the pictures. Thus, they can collect data in a very non-invasive way.