Join our pack for our 4th annual Dog Days of Summer Celebration at the Houston Zoo June 10 and 11 from 9:00 a.m. – 2:00 p.m. We’ll be offering special Meet the Keeper Talks*, enrichment demonstrations, and crafts for the kiddos. In anticipation for the event, we’ve assembled a short profile on our African painted dogs. Each one has their own unique personality. Take a look! 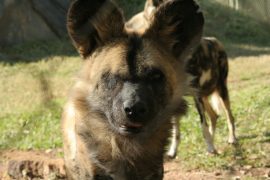 Blaze is currently the oldest male painted dog in the country at 14 years old. While he seems to enjoy the company of the new females, their antics sometimes appear to be too much for him and he would much rather nap in the shade away from the ruckus they are making.  The most vocal dog in the pack, Blaze frequently “barks” out his orders at his keepers and demands his food when he wants it and where he wants it. 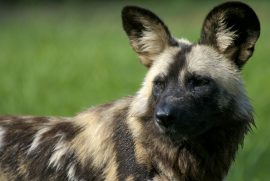 Mikita is the nephew to Blaze and the leader of our pack. He is the peacekeeper and protector, making sure the young girls don’t play too rough with Blaze.  Once the first dog to approach trainers when called, he has made it perfectly clear that he enjoys the company of the new females more than his keepers.  He will look at us as we call his name for feeding and then walk away to lie down next to one of the girls until they decide to come inside too. 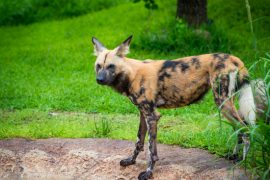 Amara’s name means “grace” and she has proven it fitting as she leaps like a little gazelle through the grass.  She is easily excitable, especially for food, and will often leap in the air on all four legs to show her delight.  Even at 3 years old, Amara is the leader of the new females and will often call to them to ensure they are nearby and haven’t wandered off.  She is definite proof that big personalities come in small packages.

Ghost “The Brave One” 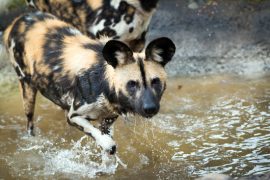 Every pack needs a warrior and Ghost is definitely ours.  She is usually the first to charge into any new situation or investigate any new toy, though she will often look to Amara for guidance.  She feels she has to be involved in every situation and will sometimes interrupt training sessions with other dogs to make herself known.  Ghost is easily identified by the white patches with two black spots (eyes) on each shoulder that look like little ghosts. 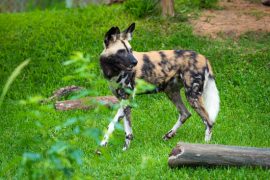 Akilah definitely marches to the beat of her own drum. She does what she wants when she wants and if that doesn’t coincide with her keepers’ plans, then so be it! She is also very tenacious when she feels one of the other dogs has something better than she does.  Her keepers were amazed as she stole a bone right under Mikita’s nose, watched him as he selected another one, stole the second bone, and started her own cache with a third and fourth.

*Meet the Keeper Talks are generously sponsored by Phillips 66.